I've suddenly become entranced by acorns. Maybe it's because I've been seeing so many types and forms of them on sale in the shops we visit to deliver our soaps. In the past week or so, I have purchased an antiqued silver acorn ornament, a brass acorn bell and a ceramic acorn trinket jar. Last evening, I was talking to my sister and suddenly it occurred to me that I could make a glass acorn ornament!

To the torch, and this was the result: 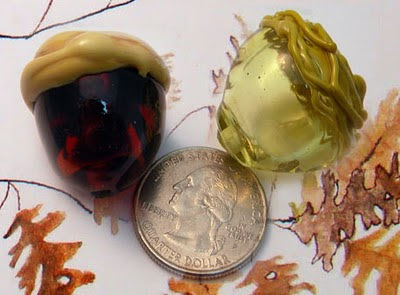 I want to electroform the tops - in other words, I want to cover them with a thin coating of copper. Maybe I'll add a stem and electroform that too - or a small oak leaf, if I can find just the right one...

But, while I was torching, I pulled out some transparent ink blue glass and tried what I call my "nebula" technique on it. I remembered to prepare all my stringers and have the foil and wire at the ready so these are just covered with lots of silver.

They reminded me of a cloudy fall sky, so I had a little fun with Photoshop adding a background.

I hope I can get to the torch more often now .. I seem to be gradually getting my mojo back!
Posted by Maryanne at 11:52 AM 1 comment:

Over the past year, on our jaunts, we pass a nearby stand of bittersweet. All year long, we watch to see how it is faring and recently, I noticed that it was getting ready to be cut. I called Tina and she was agreeable to take a break to go harvest some of the berries.

After checking the bridge I mentioned yesterday (no, it appears that there will NOT be a reproduction covered bridge to take its place - it's just taking them a very long time to get it finished,) we headed over to the bittersweet stand.

We had both taken clippers, but the vines were up a very steep climb and Tina, being the younger and more nimble of the two of us (also a Capricorn/Mountain goat,) managed to reach the vines, cut them and threw them down to me. Here's our "take." 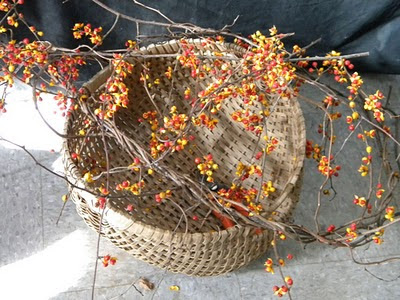 Oriental Staff Vine (Celastrus orbiculatus) is a woody vine native to East Asia of the Celastraceae family. It is also commonly called Oriental Bittersweet, Japanese Bittersweet or Asiatic Bittersweet. Oriental staff vine was introduced into North America in 1879, and is considered to be an invasive species in eastern North America. It closely resembles the native North American species, Celastrus scandens, with which it will readily hybridize. 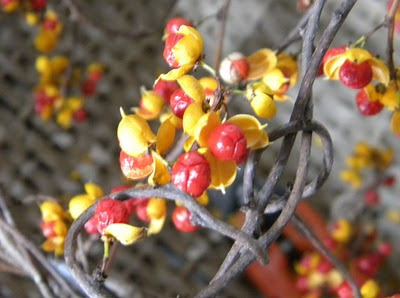 You can see here how the little bright red berries pop out of their orange/yellow shells as well as the twisty nature of the vines..

I'm not sure why we feel drawn to this plant and really don't know why I wanted it, but I'm sure it will appear as a decorative feature somewhere around the shop - maybe on a wreath.

There is a print circulating of a basket of bittersweet that has a very homey, warm feeling to it and I guess that quality is what makes it so attractive. It reminds me, as we head into colder weather, of a fire in winter.
Posted by Maryanne at 10:32 AM No comments: 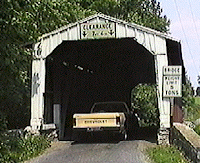 When we moved here almost 25 years ago, this quaint covered bridge was part of the short cut to the only grocery store at the time, in Mount Joy. We used it to get to the grocery store, to our doctor's office and to the store in Elizabethtown. It was also the shortest route to get to the main road to Harrisburg and points west.

In 2002, an arsonist destroyed the bridge and while it was "cleaned up" almost immediately, the scar remained but the bridge, because it was at the intersection of 3 municipalities and a historic site, was not rebuilt because all the factions could not come to an agreement about how it should be replaced.

Meanwhile, all the above trips became much more inconvenient as we had to travel a pretty circuitous route to get to all those places.

In the year preceding her death in 2005, our mother decided to take up the cause of the bridge and made it her mission to nag our state representative - probably monthly. Nothing happened, and after she died, the years passed and it looked like the bridge would never be replaced.

This summer, there seemed to be some activity on the little road that was basically closed to through traffic. My husband and son decided to go take a look and lo and behold, the bridge was finally being rebuilt. This has been going on for months (it's just a little creek!) One day they told me they had actually crossed the new bridge on their scooters and I drove down the road a day or two later to take a better look. Barricades were up so far from the bridge that I could hardly see, but, yep, there was a bridge there.

This morning, I passed the road on my way to the local hardware store (which was also a much shorter trip with the bridge) and saw an electric sign, next to the now-familiar "Bridge Out" signs. What could it be? Really? I moved to an angle where I could read the sign, "New bridge will open Nov. 18"!!!!

How exciting! The new bridge - apparently a covered bridge replica has been rebuilt there (though I'm not sure and haven't see it) - will be available again! Mom would be so happy! (Editing later to say: The replacement bridge was NOT a covered bridge. In fact, it is a very simple bridge - similar to one we have considered building ourselves in the dark of night. I have no idea what ever took so long!)

This event caused us to think about Mom and the things she dreamed of around here... of course, the bridge, but also a "Dollar Tree" which was just built this summer, and a new beautiful "Giant" grocery store full of a great selection of foods. Mom would have been so happy about these things.

We're thinking we should do something special in her honor when the new bridge opens - our own little ceremony. And since my sister moved here, she has never used any of those routes, so she'll have to relearn her way around. I bet she'll be thrilled because it'll take her past the wild persimmon tree we found a few years ago!
Posted by Maryanne at 8:06 PM 2 comments:

It seems that I haven't been at the torch for months. Although I made the little jogs in the last post not all that long ago, I was sorting through my jewelry and beads the other day and it seemed there was nothing new.

Last evening (being back on EST it seems as if it was the middle of the night!) I lit the torch, determined to make some new sets that I could put together into bracelets. Working with organic designs seems to be a good way to ease my way back into the process.

First, I did a combination I am relatively comfortable with... base bead, roll in silver foil, apply wire and voila... what I call my nebula beads. I had forgotten how to prepare for beads like this, so was frantically trying to cut silver foil and wire as I tried to keep the bead evenly warm in the flame. 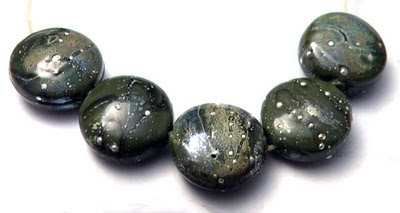 I've made a number of bracelets with this basic combination and they remain one of my favorites.

I am usually wearing one of those bracelets. Since the weather is changing, I wanted to have a more autumnal combination and used a nice olive for the base of this set, rather than the blues I often wear.

Then I decided it was time to go for something different and picked up an ochre rod to use as a base, pulled some silver plum and iris blue stringers and just went for it.

This set needed a bit of etching to bring out the colors, so it is more satiny than shiny.

This was a good exercise and as things start to calm down a bit with the soap for the winter (famous last words!) I will try to get back to the torch more regularly and will remember to prepare a bit more completely before I get the glass melted onto the mandrel!

Both will be fun to combine with other bits and pieces or beads and wire into a finished bracelet and will round out what I already have in stock.

It's a start and it served to awaken my "torch love."
Posted by Maryanne at 8:21 AM 1 comment: