Kombucha - a lesson in Timing and Value

I sometimes think my timing is off. Not only that, I apparently don't understand the value of things and tend to undervalue myself.

Witness kombucha. Kombucha is a yeast like organism which is grown in a sweet tea medium to produce a fermented drink that many find to be refreshing and helpful. The drink is now sold in grocery stores in many flavors. 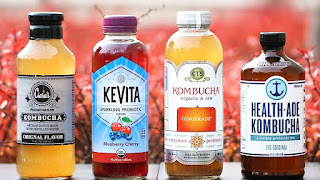 In May 1995, I was given a kombucha starter.  Some of the things I had heard about it were:
1) It may keep hair from turning gray.
2) It may help with sleep and energy issues.
3) It may promote weight loss.
There were other things, but any one of the things mentioned was good enough for me!

I brewed the tea and, along with my sister, started drinking it.  I think it also seems to remove obstacles because, by mid-June, we had signed the lease on a full-time shop that we had not even really considered a possibility until after we started drinking the tea...

The shop, which we named"The Herb Basket," was in a little town with not much else there to draw business, but we were featured in a full page article in our local Sunday paper.  It was a great piece of advertising for us.

You may be wondering how this connects with kombucha. Well, we decided that to draw folks out to our shop, we would offer them kombucha starters - for free.  These things were still rather "fringey," but they were selling on the internet for $25 even though we were under the impression that they should be freely shared.  They reproduced every week, and we had 5 batches brewing, so we figured we'd be fine.  No. 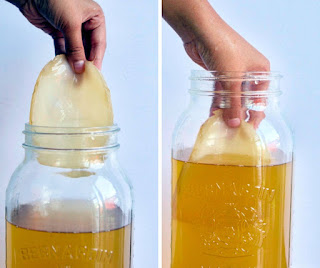 Within a week, we had a waiting list of 150!  We worked our way through the first 150 and went on to give away more than 300 "babies," more properly called scobies.

Seeing the demand for kombucha now in the grocery store is a little galling, especially since most folks don't realize we GAVE them the scobies for free.  Occasionally we'll see someone from the old shop and they will tell us what the tea did for them and thank us for selling it to them.  If only! $7500 would have come in mighty handy during those early days of the shop, but it was only our labor, a little tea, sugar and distilled water.  So many times I have given away things I have made and without charging, the value is negligible. I should have learned by now, but probably not.

We have attended events recently, and listened to speakers from the little local breweries that make the kombucha on the grocery store shelves or in their own little hole in the wall tea rooms.  I feel I need to correct some of the things they say, but figure they are doing things the commercial way and I would just confuse things - after all, they have titles, like "master brewer" or some such and we were just pioneers...

It is a recurring theme though and it becomes somewhat disheartening when we are merely trying to be fair or decent and watch those who have no compunctions about those ideals just flying past us.

I wouldn't change a thing though.  Over the five years that we had the shop, we heard so many great stories about the tea and how it helped people.  We had some wonderful times and met people we still consider friends because of  that crazy "mushroom."