I got a call last week wondering if Tina and I would do a soap making demo for a day camp at the Hans Herr House in Willow Street.

I agreed, but told her we would only allow the children to make melt and pour soap, while we would make soap "the old-fashioned way" for them.

Well, over the weekend, Tina injured herself (majorly sprained ankle) so that I went on my own into this great unknown!

I thought of taking an apron along at the very least just to fit in, but decided to just go in jeans. Little did I know that part of the camp was that the children would be dressed in period costumes. 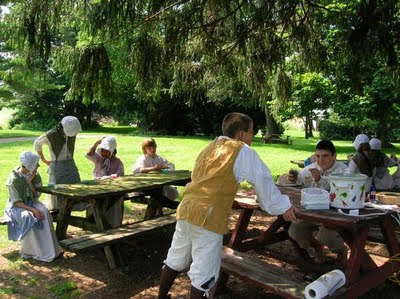 It was a new situation for me because we are were usually the ones who are in costume while we speak to people dressed in every day clothes.

The children were very well behaved and seemed to be pretty interested in what I was doing. Some of them even knew that soap was made from fats!

The best part was when I ladled out little containers of melt and pour soap for them to scent and add colorant and filler to. I explained that they were only to stir until everything was well incorporated, but they stirred and stirred until they had basically whipped the melt and pour into some sort of crystalline look!

They had listened so well while I made cold process soap, maybe they thought I was expecting them to bring it to trace...
Posted by Maryanne at 4:45 PM No comments: