We went out to Boulder, CO last week to visit our son who is interning there for the summer with a software firm. It was a beautiful and we did quite a bit of walking. One afternoon, my husband and I sought out a bead shop just off Pearl Street and I found some nice beads to add to my arsenal.

I'm always on the look out for new colors or types of leaf beads for the wired earrings I can't seem to make enough of... I was pretty excited to find these green "milk glass"(?) leaves. They looked like something from the 40's and when I got them home, I couldn't decide what to put with them, but I happened to see some of my favorite peach seed beads and it all came together! 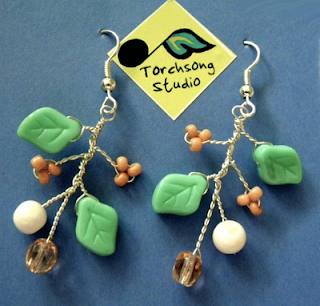 The other leaves I picked up there were a golden green color. It doesn't show up very well in the photograph, but adding golden beads, a gold-green crystal and a gold pearl made a really gorgeous combination. 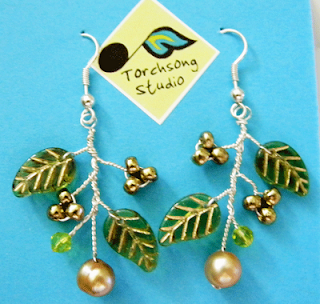 Finally, I've had these red leaves for some time, but was stuck with exactly how to use them. Again, as I was pawing through my seed beads, the "right" ecru color popped out at me and the garnet colored crystal pulled it all together! 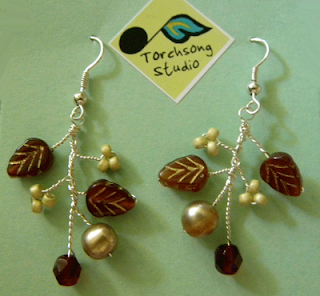 For now, I'm just posting these on my blog, but I spoke with my son about my website and he is planning something for me so that I will be able to update it much more quickly and easily and I will be able to update it and make everything available for sale. I will say though that these leaf earrings sell for $20 each and priority shipping adds about another $5, so if you are interested in purchasing a pair, please just shoot me an email at mschwa @ gmaildotcom (remove spaces and change dot to . ) and we can arrange it!

If you'd like to see more designs/color combinations of this type of earring, I posted some a year or so ago here on my blog.
Posted by Maryanne at 9:43 AM No comments:

Today, I found it necessary to cross the Susquehanna River twice. 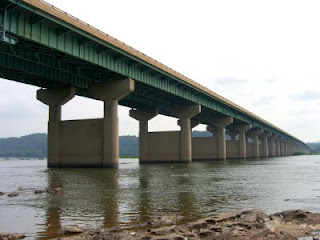 On the way west, I took the "new" bridge, the Wright's Ferry Bridge on Rt.30. I guess it isn't really new, since it was finished in 1972. It seems there are always troubles on the bridge. People jump off it, cars and trucks wreck on it and traffic is stopped. It always seems clean - and bright and shiny - and impersonal. It seems to always be undergoing some construction....

Because of construction, I decided to use an older bridge when I came home and got thinking. As a child and as a teenager, the old bridge - the one we called "Poppy's Bridge" was the one we used: 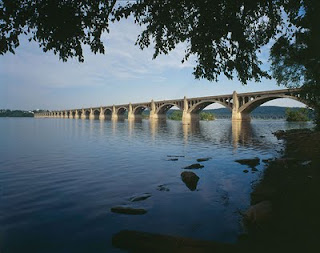 We called it Poppy's Bridge because our grandfather was employed in building it. He was a carpenter and I guess he helped to build the forms. It was completed in 1930. We always heard the tales of the people who were killed during the building - falling into the large concrete "footers." I'm sure that isn't the right word, but you get the idea.

As I crossed the bridge, I really looked at it for a change. This was part of the first transcontinental highway - The Old Lincoln Highway. At the top of each decorative pier it has with what looks like a Greek key design in it... The new bridge is much wider and roomy, but it doesn't have touches like that - nor does it have a pedestrian walkway. Back in the day, people used to actually walk across the river between the two towns of Columbia and Wrightsville.

Speaking of which... I also thought about the tales our grandmother used to tell about going to visit her oldest sister. 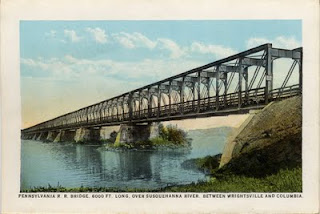 Mimi, our grandmother, was the youngest of 17, born and raised in Columbia, PA. Her oldest sister, Esther, lived in Wrightsville. Mimi talked about how she would walk across the old railroad bridge, listening all the while for a train. If one should come along while they were crossing, she and any companion would cling to the sides of the bridge until the train passed... It always sounded terrifying. Although - I was just reading about the old bridge and it seems that the few cars that wanted to use the bridge would wait until the trains passed and then use the same bridge... Sounds like a rough ride!

There had previously been two record breaking long covered bridges over the Susquehanna, but the first one had been destroyed by ice, high water and severe weather on February 5, 1832. 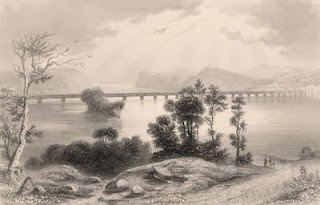 was famously burnt to prevent the advancement of Confederate troops across the river.

I think in there somewhere was another covered railroad bridge, but these are the ones I have heard about over the years. Funny the things that will occur to you just driving over a bridge.
Posted by Maryanne at 4:57 PM 2 comments: