Well, it began up at the Rosemary House at their 40th Anniversary Celebration.

I was a guest artist in the garden. Nancy Reppert, who owns the Sweet Remembrances Tearoom saw my aromatherapy vessels and asked if I could make a teapot along the same lines. These are the first attempts and I'm pleasantly surprised at how well they worked out. 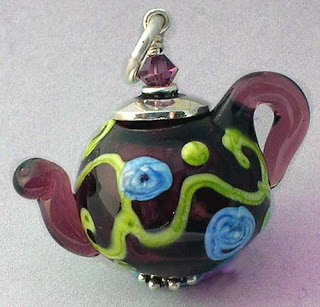 Both are about 1" from the bottom to the top of the finial.

I tried a couple of times to make teapots with solid bottoms, like the vessels, but they just didn't seem to be working out.

The purple one was my first successful attempt and it's simply a hollow with the handle and spout attached. I played with stringer to add some vines and some stylized blue cabbage roses. 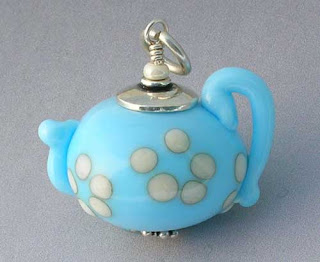 Then, I picked up the Pajama Blue and made another hollow, added a few daisies and again, a handle and spout. I love the "squatty", fairytale look of this one! It looks to me as if it came from Snow White's cottage.

Because they are hollow beads, it made them easier to wire together with a bead cap for the top and a single bead added for the finial.

You can click on any of the pictures for a closer look. 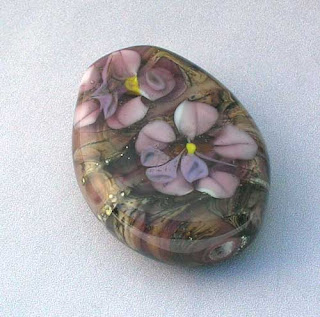 As the day went on, another Reppert Sister, Cary, requested a pendant similar to something I already had made, but with different colors....

This one is the result.

She wanted the organic background with the creased flowers in purple. I think I'll give this a couple more tries and send her some pics for approval.

Last week at our Farmers' Market, I had my jewelry along and a woman stopped by and asked if I had any "patriotic themed" beads. Since it was Memorial Day, maybe I should have, but I didn't. 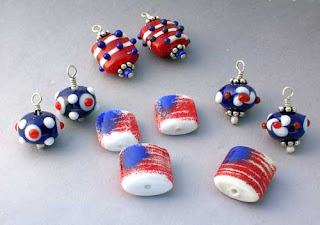 Actually, I have a lot of trouble finding a good red for this type of thing, and I was trying to figure out how to do some kind of a flag design....

I made a few earring sets in the proper colors, as you can see - but the flag theme evaded me.

As I was standing in the shower the other morning, it suddenly occurred to me - I can use red enamel(!) ... and the flag beads were born. I still have to wire them up into earrings and a couple of pendants, but I'll have a number of patriotic themed pieces for her to choose from this week. 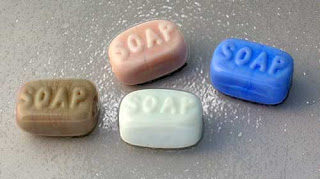 Finally, soap beads... I've been struggling with the old way I was making them, and had actually decided to just stop doing them.

Then I saw a post on one of the glass forums I frequent. A new press was out with words on it. I contacted the press place and asked if I could get a custom press made for soap beads and ... voila!

I can make them in any color that I have glass, but I think I'll try to pare it down to just 4 or five basics.... But, I can always make special requests for people who want to match them to their own soaps....
Posted by Maryanne at 9:29 AM 1 comment:

What has she been doing? 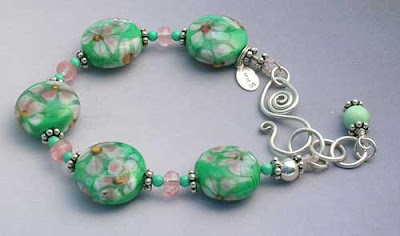 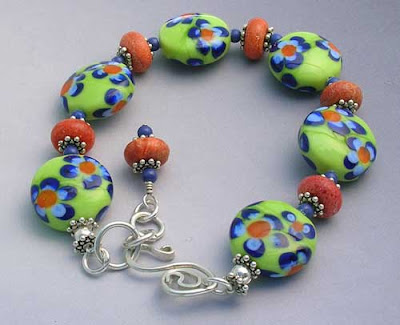 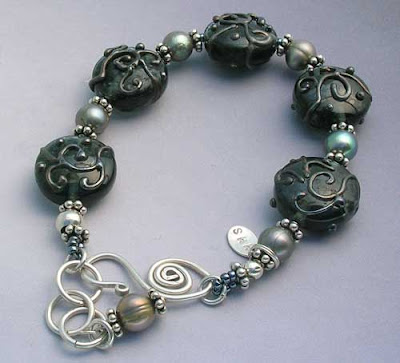 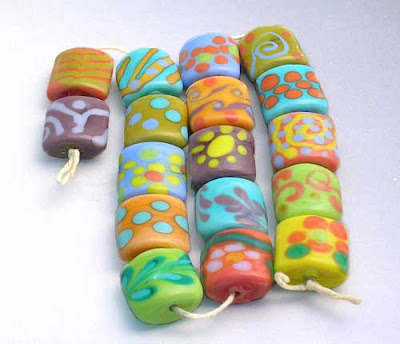 And finally - "Summer Chicklets". This is what happens when I get a new press that I happen to love! I've just been playing with all the bright colors and have plans for about 8 more beads to complete this set. I've been planning what to do with them as I worked on them. In fact after the first one or two, the inspiration struck to make a loong necklace that I can wrap around my neck a couple of times and that will match all my bright T shirts and other summer clothes.

I've had a number of requests recently and I'll be showing those in my next post. Teapots made in the same way as my vessels, a floral focal on an organic background and some red, white and blue beads for the patriotic holidays.... Soon as I can get them together with my camera, they'll be up.

I'm going to add these bracelets to my website for now....
Posted by Maryanne at 3:57 PM No comments: 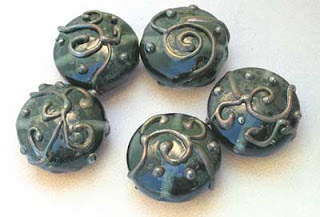 After the Landis Valley Show this weekend, where I sold the bracelet I showed in my last entry, I was inspired to make some more of the metallic scroll beads. These aren't exactly the same. I tried a different base and it turned out pretty well. I do still have a large focal that matches the set I sold in a bracelet. 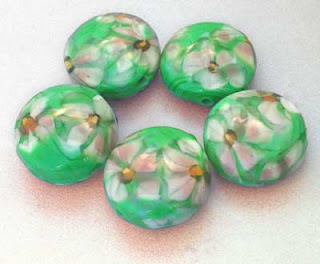 In honor of the little pink and white flowers that bloom all through our woodland area, I made these floral beads and call them "Spring Beauties". I love the pink blush on the petals. That was on purpose and it's always nice when the intended effect is accomplished. 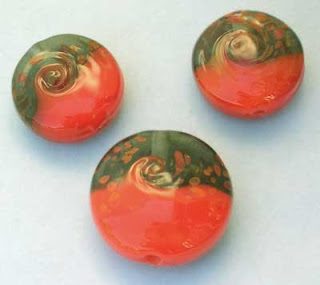 These are called Persimmon Swirls. I think they will become a necklace and matching earrings. The glass color is persimmon and it is a very bright orange/red. The darker portion of the bead is transparent steel gray.

I'll be displaying (and selling) my work at The Rosemary House in Mechanicsburg this weekend. They are celebrating 40 years in business and I am so honored to have been invited to join the party!
Posted by Maryanne at 5:10 PM No comments:

A busy day in the jewelry room yesterday. Along with a few pins and earring sets, I finished up some new bracelets with some of the beads I showed the other day: 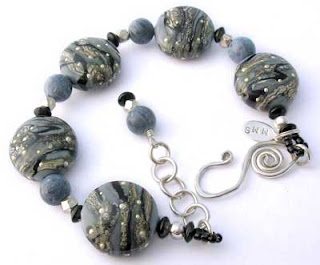 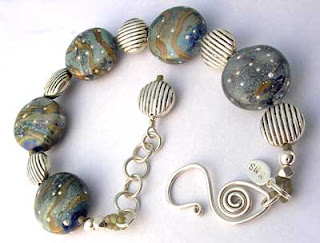 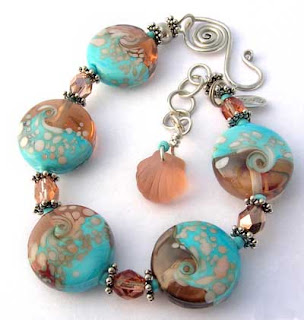 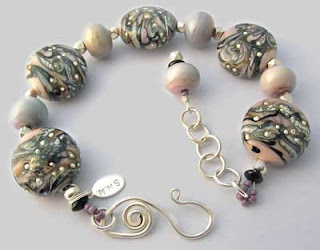 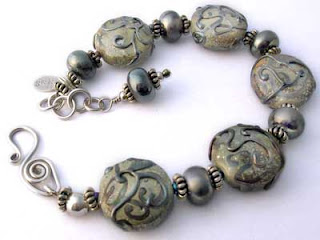 I'll be taking these to Landis Valley this weekend and, since it IS an herb festival, really don't expect to sell much. What is left will be put up on the website - finally, some new items!
Posted by Maryanne at 9:42 AM 2 comments:

Under the Sun - Something for YOU! 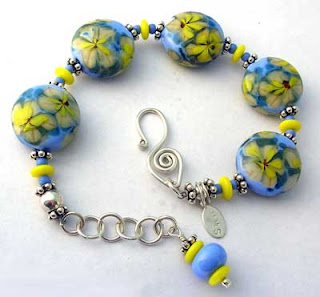 Okay - yesterday, I mentioned some beads I wasn't showing because they were a surprise for someone...

Well, my sister, Tina Sams has a book at the printer. It should be delivered today or tomorrow. I made a bracelet based on the colors of the cover of the book and was planning to give it to her when the book was delivered, but I just couldn't wait.

I made two bracelets and she took her choice. There was a second bracelet made and I said, why don't we offer it as an extra incentive to buyers and contributors?

The bracelet to the left is the one we will be giving away. This is a $55 value. The large beads are handmade lampworked and the silver is sterling with a handmade "swan" clasp.

So, here's the deal... If you have already ordered the book OR pre-order before May 7th (at a special price, I might add) OR if you are planning to pick up your copy at the Landis Valley Herb Fair this weekend OR if you are one of the many contributors to this book... your name will go in a hat and on Sunday, we will draw the winner. 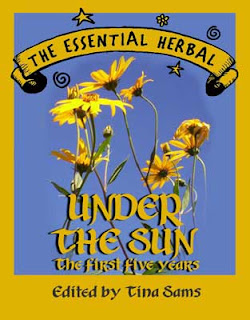 It's over 200 pages, packed with in depth information, ideas and recipes and I believe it is slated to be a classic - valuable to beginners and old timers alike.

I did the layout, so I'm pretty intimately acquainted with the contents and it is great.

So, order the book here , get a special deal on the first edition of a very special book you were probably planning to buy anyway AND you have a chance to also win a handmade one-of-a-kind bracelet!
Posted by Maryanne at 8:02 AM 3 comments:

I have a few more sets to show. A couple are in the kiln and a couple more are a surprise for someone who might read this.... 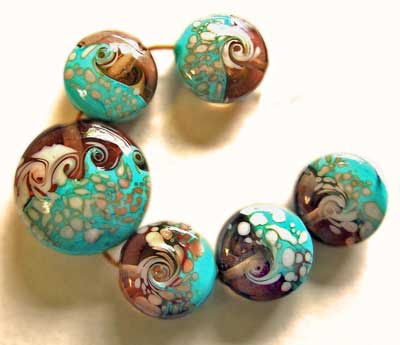 But, for today, I just wanted to post this set. I was pleased with the color combo and the salmon frit went perfectly with the turquoise and the rose colored transparent.

There's a large focal bead (about 1-1/4" diameter) that could be used alone in a necklace and then the five "smaller" beads that would make a gorgeous bracelet. It may just become a bracelet this afternoon, as a matter of fact!
Posted by Maryanne at 1:50 PM No comments: