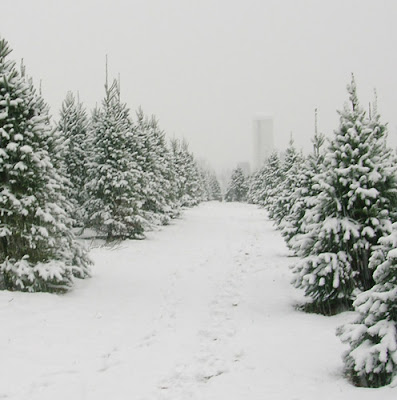 This is the last weekend for Frog Hollow this year. On Sunday, we will have sold our last tree for the season.

On Tuesday, we had a beautiful snowfall and expected to have a pretty uneventful day, but apparently there are some folks who don't mind braving snow (or even the occasional changeover to freezing rain) to cut their tree.

Somehow, I found myself up the hill with my camera and decided to take some "winter wonderland" pictures. 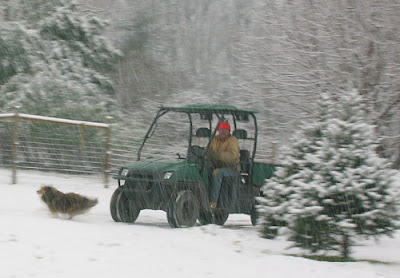 Bob and Rudy had to come up too. You can see that Rudy, as ever, is proving he can outrun the "Frogmobile".

Sometimes he leads the way and sometimes he decides to take a shortcut through the trees or on a connector road and manages to pop out ahead of his nemesis! 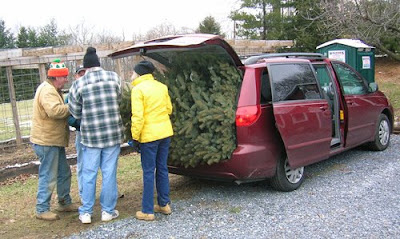 I took this picture today. This is a huge Blue Spruce. I wish I had thought to get the camera a little sooner, because when they began to load the tree, it appeared to be a nearly impossible job. It seemed bigger than the van! As it is, it barely fits in the van.

The people came into the shop and we laughed about the fact that they usually bring a bigger van and they just overestimated this one's size.

I found it interesting that their son's girlfriend had the job of sawing this monster down...

So - another tree season has come and is just about gone...
Posted by Maryanne at 4:07 PM No comments: 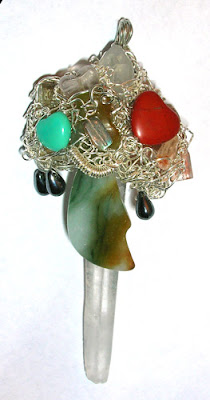 A few weeks ago - or was it more(?) - a friend handed me a little baggie full of beads, stones and crystals. She asked me to put them all together into a pendant.

They've been sitting around in my living room, taunting me for all the time since then.

Last night, I finally decided how I would put them together and this is the result.

The pendant is about 4" long and quite impressive...

I have to drop Roe a line to let her know to check here. If you want a better view of it, just click on the picture and it will appear on a new screen, enlarged.
Posted by Maryanne at 4:59 PM 1 comment:

Another mention ... and Rudy in the rain

After all the media attention we have gotten this year, we have had some fun and busy weekends around here.

There are usually two busy weekends each year - Thanksgiving weekend and the weekend after. This year was no exception.

We set up our shop, but when things are crowded, most people want to just get in and out as parking is at a premium around here. This year, we offered free cocoa and hot cider on Saturday and Sunday both weeks and at least had a few folks stop into the shop for that! Last Sunday was bitterly cold and we were glad we had something to help our customers warm up a bit.

Things should be a bit more leisurely the next two weeks and that is fine with me.

I was surprised by a google alert this morning that led to this article which is about keeping Christmas green, and mentions Frog Hollow! 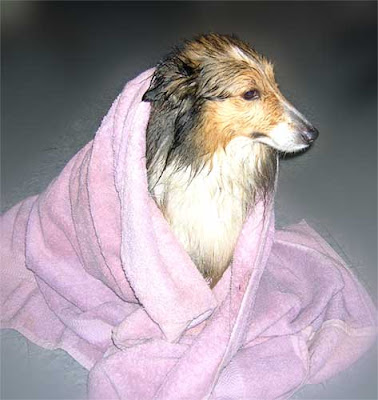 Every year during "tree season", we have a day or two (and sometimes more) of rain or other inclement weather. The rain is the worst though.

I was hoping for a day or two of respite in the middle of the week, but it is stretching out and people are coming out despite the pouring rain.