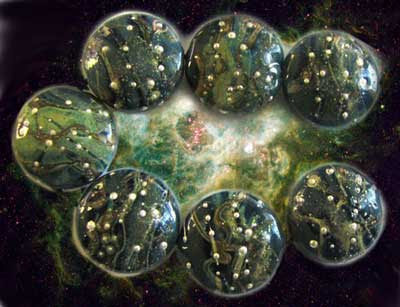 I've had a couple of requests for some beads (and a bracelet) like the one I showed a couple of weeks ago called "Moonscape". I can't seem to part with the original, so, last evening, I finally sat down and made some similar beads using a blue base rather than the brown I originally used. Next, I'll probably do them using a green (olive) base and see what happens then.

The other thing I've discovered is that it's fun playing with the backgrounds of the bead pictures! In this case, I downloaded a picture of the Triangulum Nebula and superimposed the beads over it. So that's the name of this set - "Traingulum Nebula". I think the rest of these will be part of the "Nebula Series"!

Next I'll be wiring it up into a bracelet... should be pretty.

Just thought I'd share it with you.. on my birthday!
Posted by Maryanne at 10:33 AM