I was making a lot of organic beads. I love that style, but sometimes, I need to work with some bright colors. 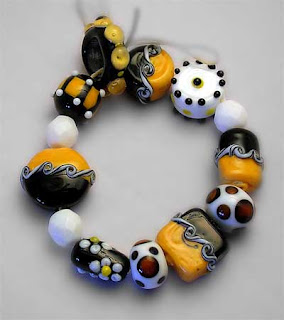 First, I made something that I've been thinking sbout for some time - "Hey Taxi!" I've been wanting to combine these colors for some time, but I think the trip to the city last week put me over the top!

Mustardy yellow and black, with black and white accents.

Does it say taxi to you? Or does it say school bus?

I think all the funky shapes and motion makes it very city-like... 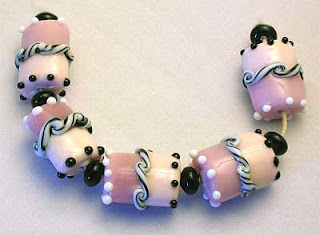 Then on to another city - Paris and a set I call "Ooh La La"!

Why is it that pink, black and white say Paris to me? I looked through images on the internet and never did figure it out.

I thought maybe it was Schiaparelli, but that was a hot pink. I did find some note cards and a picture with a pink dressed lady with a poodle. You would think it would be easy to figure it out, but I didn't.

I don't know why this one is called "Heavenly Chatter", either, but that was the name that came to me!

Okay, it was the blue, but the coral wasn't exactly relaxing and restful, so that made it chatter. 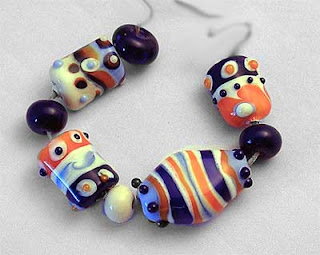 Finally, I think I went somewhere south of the border for this combo, although it isn't really sunny enough, it certainly is bold.

I think maybe "broken pottery" or even "rag rug", but it's strong with sharp lines and pattern... I don't know.

I may actually be doing a show again, which is what got me working on new sets, but I have time to come up with a name.
Posted by Maryanne at 4:16 PM

More beautiful beads! You are a creative wonder! And speaking of wonder, I wonder if the pink, black & white says "Paris" to you because of Coco Chanel & Jackie Kennedy - the look of the 60's?