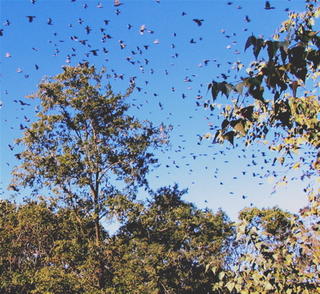 Since we have been *enjoying* our share of the tail end of Wilma today, obviously this picture was taken a couple of days ago.

I was inside and started hearing quite a commotion outside, looked out the window and thought I was watching a remake of "The Birds".

From time to time in this area, we have infestations of crows. So far we've escaped them, but this day, we were the target! They roosted all over the trees - covering them completely. A dogwood tree was completely black. I haven't checked yet, but I bet a good portion of the wealth of berries it held is gone. When I decided to go outside and get a picture of the blackened trees, they, with one mind, took to the air in a swirling black cloud.

I imagine this happens in a number of communities, but crows were a huge problem a year or so ago in a couple of local areas. In particular, the birds were damaging the covering in the center of our large local mall.

There were a number of methods tried to get rid of them. The one I liked best was cannon fire!

Our local mayor is a cannon collector. Give him a chance and he will fire a his cannons. He brought fireworks to downtown Lancaster for various celebrations and other than a few stray burning pieces landing on the tops of parking garages... it was a good idea. It got people into the center of town. He brought them in for the 4th of July celebration and also, we now have a non-alcoholic "First Night" (New Year's Eve) celebration, complete with fireworks, for folks to attend.

Anyhow, the mayor, of course brought out his cannons and they were used as one of the attempts at deterring the crows. I forget the other methods that were tried. None of them really worked. They all probably annoyed the crows, but basically, one day, the crows just decided it was time to pull up stakes and leave.

Luckily, our visitors just stuck around for an hour or so and decided this wasn't *home*. It was interesting - and a little frightening - but, at least it was temporary.
Posted by Maryanne at 8:37 PM

That's when I get in my car and step on the gas! LOL!