Things have finally slowed down around the tree farm enough that I didn't feel guilty doing a little shopping yesterday. I'd post some pictures, but you never know who is checking in here!

The Sizzlers were doing a late bead show in York this weekend and I chose to opt out just because I can only be spread soooo thin, but if it's the same date next year, I may give it a shot. I stopped up to see everyone and wish them a Merry Christmas yesterday. One of the other reasons I wanted to get to the show was that the guy who sells the magnetic clasps I like was there and I wanted to stock up. Also, I've been doing a lot with chain and there is a good source for silver chain that was there too. 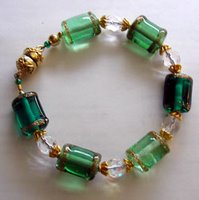 Another thing I was anxious to find was some gold vermeil findings and I redid a bracelet that needed some work. The beads have stripes of goldstone around the edges and it just cried out for gold findings. My clasp guy had some nice solid vermeil, magnetic clasps and I found some gold bead caps that just set off the crystals and the whole look - don't you think?

I feel like i've been gathering in so many nifty components and the skills to go with them that I can really sit down and put together just about anything that my imagination comes up with.

This goddess bead has been weighing on my mind. How to put it all together? Yesterday, I sat down and really thought about it... I like the way she came out. Very fetish-like. A sterling bail through her with bead caps finishing off both ends of the beads. And then the danglies... a leaf, a spiral and a crystal point.. Simpler than my original idea, but I like it... to the point.

As I was perusing one of my favorite forums, I found someone who makes pendants with pictures and optical lenses. She had some made with Mucha posters and the wheels began to turn. I contacted her and am in the process of purchasing a pendant made with my current favorite poster - Champenoix. I have an idea of some kind of collage kind of piece with the pendant combined with my beads and some other things that I want to make to go with it... I'm sure I will post it when it is finished.
Posted by Maryanne at 6:29 AM

Sorry I missed seeing you on Sunday.