Well, the rain was gone (it's returning later today though), we did a bit of exploring yesterday in the woods and in the pond.

A few weeks ago, Tina and I had found Spiceberries starting to ripen on the trees in the woods. We picked as many ripe ones as we could find thinking they'd be a great addition to the still experiments. Then, we decided we'd be back in the next week or two to clean up all the berries still ripening. One week led to another and when we checked yesterday, they were gone. I guess the birds and animals in the woods think they smell as tasty as we did. 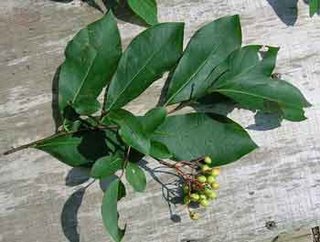 On our way back up the path, we saw another plant that we didn't know, but it held these bunches of berries.

We brought a sample up to the shop and began consulting field guides. Seems these are Black Haw berries.

From what we could find, the bark of this plant is a substitute for cramp bark and also, some people make jellies with the berries. There was one ripe (black) berry in this bunch and we both tasted it. It was pretty bland. 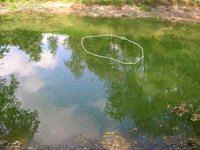 As we passed the pond, there was a disturbance on the surface and when we looked closer, there were a large number of fish swirling, then stretching out in a block, swimming a bit and then swirling around fallen leaves, etc. The "disturbance in in the rough little oval I drew on the picture.

When we moved in the pond was clear and housed a large school of big goldfish. In the winter, on a warm day, the fish would swim around the top of the water and we could see them from our living room window.

A flock of ducks - bought as day old chicks in a box which looked much smaller than it was - had taken their toll changing the chemical make up of the pond. Bass (carnivorous fish) had been added and they ate most of the resident goldfish. Duckweed which had been clinging to other plants we added over the years had taken over the pond.

This is a huge discovery. My husband, Bob, has been working on the pond for the past 2-3 years, trying to bring it back to its former glory. He added a few "goldfishy-type" fish this spring and they seem to have multiplied.

It's difficult to get a good picture of the "gang", but here they are. There are a number of apparently adult fish in their full colors and the more immature ones seem to be mostly drab colors, but by this winter or spring, I'll bet we'll have the colorful display we loved 20 years ago!
Posted by Maryanne at 8:58 AM