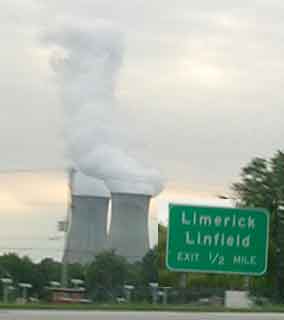 Lots of things going on, nothing really Earth-shattering.

Yesterday, we went to visit (and feed!) our son at Ursinus College. It's not a very long trip - only 1-1/2 to 2 hours and I really don't know why we haven't visited him more since he started last year. Part of it is that he comes home pretty often. Apparently the driers at school don't work! He does his own laundry so I really can't complain and it's good seeing him and meeting the friends he brings along.

I snapped a picture of the cooling towers at the Limerick nuclear plant. It's pretty close to Collegeville, so it seems he's moved from the shadow of TMI to the shadow of Limerick. 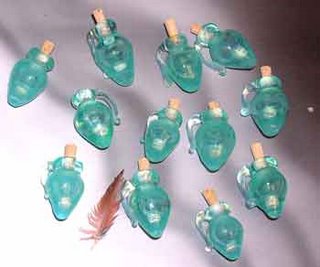 This, though is what I've been working on lately. I was asked to make 12 aromatherapy vessels for a well-known essential oil company and thought I'd give it a shot.

Originally, I resisted because I would really prefer not to do anything resembling production. There's enough of that in the soap business.

I can't seem to do more than 3 or 4 at a sitting, but I did get them done. They are the Caliente glass that I love.

I broke down and ordered a few other colors. Probably not enough of any of them to do another full order, but plenty of experimenting. Some are reducing colors. In other words, the metal in the glass rises to the surface when they are flashed in a reducing flame (propane heavy rather than oxygen heavy which is called an oxidizing flame). 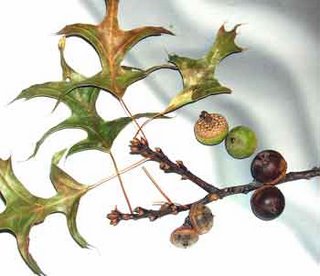 I'm also working on an autumn necklace which will include all the leaves I made a few weeks ago. I wanted to make some acorns and some oak leaves to add to it and while we were visiting the campus yesterday, I found some fallen acorns to use as models.

I have tried making acorns before, but they look more like a male body part! Maybe with real models in front of me, they'll look like what they are supposed to be!

On the other hand, the oak leaves I have made before actually have turned out pretty well. We'll see.

Today, we're probably going to make some "seasonal" soaps for the holidays. A bayberry for sure and probably something apple-y and spicy for fall.

Tina already reported on the Colonial Day show we did this weekend. I was saved by some prior orders that I have to deliver at the show and actually, the jewelry went all right, but nothing like what we had imagined.

I'll try to get back on a routine of posting again. It seems I often forget my camera and I really don't like to post without a picture!

I did want to mention the memorials yesterday and how touching it was watching the people who had lost loved ones 5 years ago. Yesterday, as we drove down to Rob's school, I was surprised at all the billboards and signs in memory of the disaster and I was also surprised at how raw and close to the surface all those memories and emotions still are. Even though I didn't lose anyone close to me, we as a nation lost our innocense once again.
Posted by Maryanne at 8:56 AM

Thanks for posting about stuff!

I think you can honestly say now with confidence that you are a vessel master! You have got it down! I can't make 12 of anything...let alone VESSELS! Great job!

See you on Saturday. I'm going to send out a reminder e-mail tonight so everyone remember. As far as head count...it's looking kind of scarce so far. Lots of people doing other things. Sorry!