A few more comments and some pictures 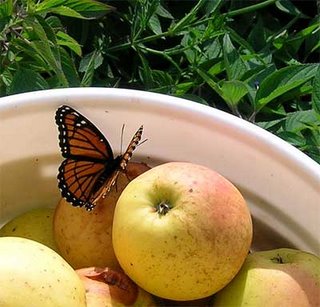 This is just a happy picture. Bob had picked a huge bucket of apples off the tree outside the soap studio and they were sitting on a bench on the porch. I came outside at one point and this is what I saw. I thought, "A is for Apple and B is for Butterfly."

It said to me that the season is winding down. Somehow it is a harvest picture to me. I love the colors together. It's my new screensaver picture.

A couple of things more about the shootings of the girls in the Amish school and then I'll go on to more cheerful topics.

First, I find it interesting that we here in Lancaster County refer to the Amish as "our" Amish. There is a very protective attitude toward those whose life has been so horribly defiled. I think part of it is that many of us who are natives here have similar or even identical roots. If ancestors of ours had made different decisions, we would have been Amish ourselves. When our grandfather's family came here 7 generations ago, they were members of the Anabaptists fleeing Europe looking for religious freedom. The head of that family became the first Amish bishop in this County.

Second, I am impressed by the news coverage. There is truly a lot of respect shown to this very different way of life. The funerals yesterday and today have been allowed to be what they should be, solemn, private events. Roads have been closed and State Police have guarded the routes to insure the privacy of the events.

At the same time, the customs of the Amish are being discussed reverently, not as usual... as a joke. The Amish belief in forgiveness seems to have stunned some of the news people and I doubt very much that they will leave here without having been touched in some way by the ideals of these peaceful people.

On Monday, I was putting the finishing touches on the magazine (Essential Herbal, Nov-Dec 2006) and Tina was making the soap that needed to be made that day. That day, we took a break to go up to her house to get a picture we needed and that was when we found out about the shootings.

On Tuesday, when we were cutting the soap, Tina let out a gasp and said, "Look at this!" Do you see the little girl's face in the soap? This soap was poured almost exactly when the worst was happening that morning... Give you chills? It did us.
Posted by Maryanne at 4:13 PM

That's a lovely picture of the butterfly.

That butterfly pic is just perfect, what luck getting that! : )