Well, all things change and again, we walked through the woods at the end of another summer. We just experienced our first frost of the year and most of the leaves are down.

Last year in the beginning of November, I posted my favorite picture of our woods. In that picture, I was looking out from inside the woods and this time, I'm looking in.

It's a week or two earlier in the year in this picture and yet everything is bare.

If you've been following the progress of our gourd arbor, here's what one good solid frost will do to a summers worth of gourd growth.

It may look a bit sad, but all those lovely gourds hold a promise of lots of fun when they have cured.

Bob and I are having something of a disagreement about how to cure them. We've been all over the internet and opinions vary on the proper way to do this. Some say harvest before the frost, some say leave them on the vine all winter. I suspect they will be cut soon and laid on some bread trays in a non-freezing area (the garage). It's sort of a compromise. We'll see....

Inspired by all the leaves and color leading up to the frosty aftermath, I finally put the leaf beads that I showed earlier together into a necklace.

It's 20" long so it hangs nicely on sweaters and looks nice under the collar of a shirt, coming around in front of the buttons, if you know what I mean.

I followed the basic idea of a necklace in a special jewelry edition of "Belle Armoire" magazine. The first three leaf beads are strung on softflex along with single beads. Then another pass or three is made through the larger beads - looping between the large beads every time. Finally another pass attaches 4 more of the leaf beads as well as a few more loops. 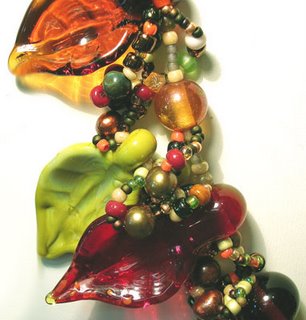 Here's a section of the necklace. Various sizes and colors of beads and pearls are used throughout the necklace. I made something of a "bead soup" and tried to string the loopy parts as randomly as possible. The colors did turn out very well and although this wasn't my first idea of a three tiered necklace, it can probably be worn for many more occasions than the original design could have.

It's kind of a celebration of fall. Although I'm not really looking forward to winter, who knows what that may inspire?

One more thing we did today was make some old fashioned "lye soap". Now, all the soap I make is "lye soap" and in fact any real soap you will ever find will be made with lye. But, one of my customers said she had tried something from someone else labeled "Old Fashioned Lye Soap" and asked if I could make it for her. Basically, she wants what I make only cut somewhat chunkier and wrapped more primitively.

I felt that old fashioned also called for the use of Lard instead of all the lovely tropical oils I usually use.

Soap making would have actually been one of the traditional chores of fall. Along with all the butchering, the lard would have been rendered and made into the family soap supply for the year. I've always talked about that in soapmaking classes, but never actually made lard based soap before. So I hunted it down and finally made the soap. Other than the fact that it seemed to take a bit longer than usual to trace, it reminded me of the bear soap I made earlier in the summer.
Posted by Maryanne at 2:50 PM