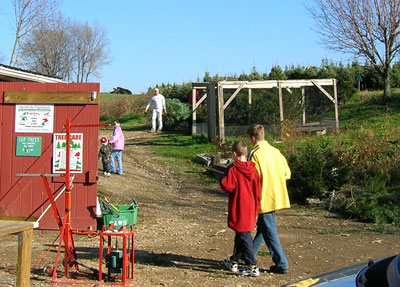 Starting the day after Thanksgiving, our Christmas tree farm starts to get busy and this year was no exception.

Contrary to the forecast a few days before, the weather was spectacular and folks took advantage of it to take a number of trees out of here.

Others were content to tag theirs in order to return later and cut them in possibly more inclement weather.

It is so nice to see old customers returning year after year. (Those who stuck by us in the lean years which had resulted from some nasty droughts.) Seeing the kids returning each year and how they've grown is always amazing, but the one's who are now grown with their own families is even more astounding! 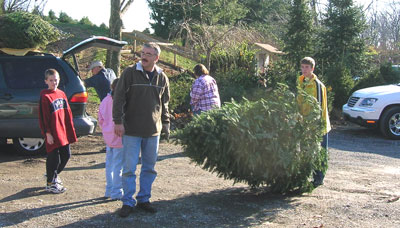 Our own son was less than a year old when we started and now he's in college, so I guess it's pretty amazing to them too!

It's also nice to meet all the new folks who are just discovering us. We have a lot of development going on relatively nearby and those new "neighbors" are finding us.

We were so far out in the "boonies" 20 years ago when we moved here and although we're still well off the beaten trail, civilization is coming to us!
Posted by Maryanne at 12:38 PM

Hey, Chica!!! I'm coming next week sometime to pick out a tree! Will you help me choose a good one again? You have a better eye than I do for this. I miss you, and I hope to see you soon!