What happened to the gourds? 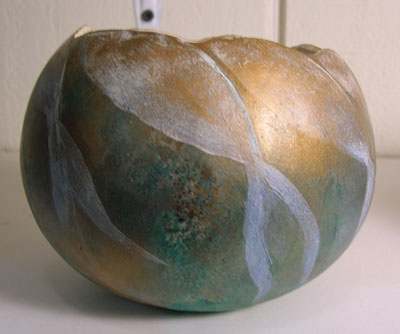 If you've been following the saga of the gourd trellis, you may have asked yourself, "What are they going to do with all those gourds?"

Well, this is my first attempt at making a container/bowl from one of them.

I scalloped the top and painted fish all around the surface.

Originally, I was going to make a kind of aquarium out of it, and that may come later on another on, but after the fish were done, it just looked nice that way and I softened the design with some metallics. 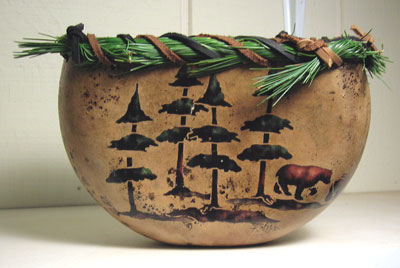 Then, I went on to one we were watching all summer. It was caught between two of the cross beams and wound up flattened on both sides, sort of like a canteen. The design is a rub on that we got at A. C. Moore. As soon as I saw it, I knew where it was going to go.

I think it turned out great with a lodge look to it. There is a bear on one side and a moose on the other.

I had drilled holes around the top and had a couple ideas how to finish it. Then I remembered the pine trees outside. Duh, we live on a Christmas tree farm! 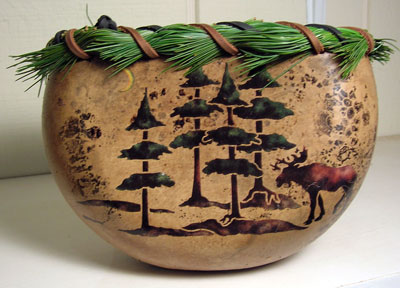 The needles will discolor with time, and that won't be a bad thing, but meanwhile they are bright green and throw off a lovely fragrance.

The natural coloring of the gourd just seems to be the right backround and a little stain brought it all out.

Yep, we took a break from the soap yesterday and worked all day and into the dark out in the shop on these babies. I took a break from time to time to work a bit on the magazine. Back to work (soap) today although we may have time to play with another gourd in between! I know Bob is impatient to see one or two made into bird houses so we really need to reward all his hard work with a few of them.

If you want to see the ones Tina made, check her blog. She may not have them up just yet, but they'll be there soon, I can guarantee it.
Posted by Maryanne at 9:34 AM

Maryanne the gourds are gorgeous!
Good luck with all your new ventures.
Is your little shop going to be open for business this year?
I need to come up and get some special soap for some very special people.

Yep, we'll be open again this year with our soap, etc. plus Tina's books
and my jewelry.
Love to see you!
BTW, sounds like you had a great trip to FL.

please! he he he

I miss you. Need to come out your way.

Oh, believe me, there are PLENTY!