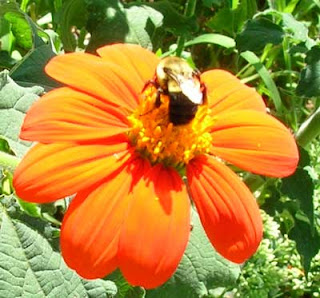 Lots of things going on. Piles of soap ready to go out. Odds and ends I've been experimenting with on the jewelry front. And a new venue for soap - the Mt. Joy Farmers' Market.

This flower is called Tithonia, the torch. I thought it was appropriate for a blog called "Torchsong" and Tina thinks I should use it for my logo. Maybe an avatar...

The flower is such a bright orange and just blazes away on its dark green foliage. Looks like the bees like it too! 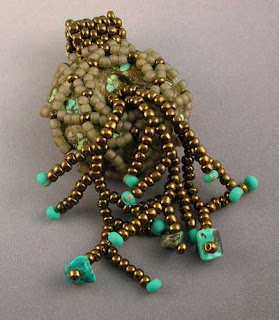 I've had this turquoise donut for years. I believe we picked it up at the Boutique Show in NYC one time when we were there shopping for our shop, so that's at least 7 years ago.

The donut is actually more matrix than turquoise, but it was always interesting and for some reason, called to me. Over that time, I've found beads that match up with it and finally put something together.

Here's what Wikipedia says about him: "Cthulhu is a fictional being created by horror author H. P. Lovecraft, and is one of Lovecraft's Great Old Ones. It is often cited for the extreme descriptions given of its appearance, size, and the abject terror that it invokes. Because of this reputation, Cthulhu is often referred to in science fiction and fantasy circles as a tongue-in-cheek shorthand for extreme horror or evil." 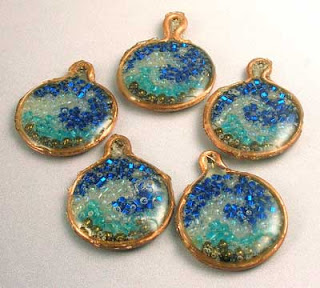 Along with that, I signed up for a charm exchange on a jewelry forum I frequent. These are my first experiments with some resin charms I'm thinking about using for my contribution.

They are still pretty rough as they need a lot of clean up. I made the bezel with copper wire and used seed beads as "mosaic tiles" to form a wave design. Then, I poured a two-part resin over it all. I'll be getting out the Dremel and polishing up the bezel.

We'll see how it looks finished - maybe with a few dangles added. To get both sides smooth, I may have to do three pours and each pour involves waiting for it to cure. I have to make a total of 25 of these though, so this is only the start. If it's too involved, I may have to come up with another idea. 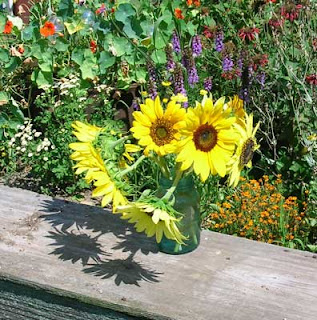 The Farm Market on Saturday was so much fun! I've always loved retail, just not on a regular basis where it takes over my life. This is a 4 hour, once a week deal. Very close to home, so it's super easy to do.

We chatted away with the people who came - a very interesting cross section of the area. There are a lot of people moving into new housing here and our population has become much more diverse over the years than it was when we first moved to the area 20 years ago.

To introduce ourselves, we handed out soap samples to customers and also to the other vendors. At the end of the day, the guys across from us came over with bouquets of sunflowers to thank us for their soap (and also because they just didn't want to haul them home.)
Posted by Maryanne at 6:18 AM