That's for the Birds! 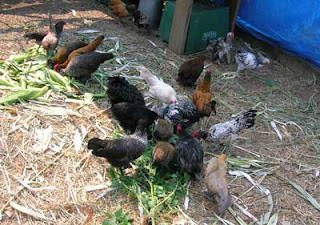 A few months ago, we finally released the pheasants that we had raised last spring and fed and kept safe through the winter.

Bob replaced them with a flock of bantam chickens. Well, the chickens have grown into a most interesting melange of every conceivable combination of chicken, only a small version of each.

We have Frizzles, we have Cochins, we even have Polish chickens! I was afraid we had been slipped a few miniature emu chicks (is there such a thing?), but after looking through a number of web pages dedicated to bantam chickens, I found that they will develop large pompoms on their heads, but they are definitely chickens! I think our favorite is a Cochin who seems to have a bit of Frizzle in him. He is low slung and covered with wild black feathers. We call him "The Harlequin Phoenix" and although it's hard to see, he is right in the middle of the group in the picture above. 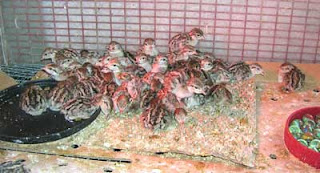 Yesterday, the phone rang. It was the Post Office, "Come get your birds!" So, off Bob went to pick up our latest additions: 50 day old Chukar chicks.

They seemed oddly quiet in the box, but, oh boy! Once the box was opened and they were scooped out and into the cage, they became lively.

They ran from side to side, jumped straight up in the air and managed to squeeze out through some unprotected holes in the cage which we quickly closed.

They were fed and watered and knew exactly how to handle both. Then it was time to rest. Baby birds, like many baby animals, have a disconcerting habit of collapsing unceremoniously on the ground and falling fast asleep. They look dead. I was horrified to see so many of them lying carelessly about the cage, legs thrown out, some of them soaking wet from their recent drink/bath. Those who were still awake tromped heedlessly over them, on their heads, necks, stomachs - occasionally giving them a peck or two just for good measure. It didn't look good and I had one pegged as a goner for sure. I turned around and he was gone, apparently rested and back to life again.

After a night on their own, we haven't lost any but they're still doing their little collapsing routine. Gotta love those birds.
Posted by Maryanne at 11:31 AM

We have been busy torturing my mom, so I haven't dropped a note in a while...sorry! I miss you though and have been thinking of you. Seems like you've been pretty busy too!