So, I mentioned Murrinis yesterday on Facebook and this is what I was talking about. 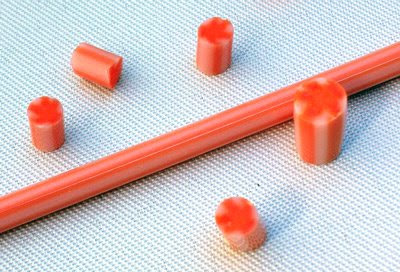 It isn't a food, but it is glass and it is a cane that is built by forming a glob of glass, a large version of what you want the smaller "cane" to be when it is pulled. It winds up as a long "cane" which must be cut into sections to be applied to beads. This is a VERY simple version of a murrini. Some are extremely complex, for instance I believe someone made a Mona Lisa murrini.

I applied it to a bead yesterday and this is the result: 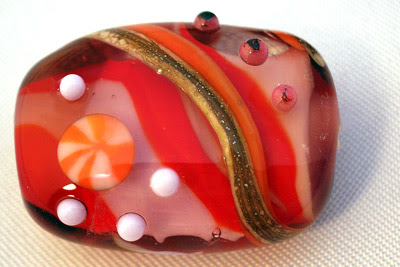 I was really happy to see the result because I was sure it wouldn't form the pinwheel, so when it did it was a happy surprise. I had fun making the base bead, just because it is such a departure for me. I've been collecting some really nice corals and pinks, so had the chance to use a few - along with some pale lavender and a bit of silvered ivory.

After that little triumph went into the kiln, I started playing with some other colors. There was also a complex stringer used in the next bead, but it disappeared in all the various layers. Oh well, I was happy with what the silver and "magic" did all by themselves: 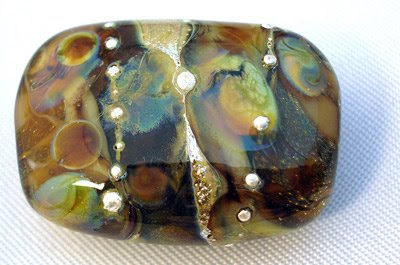 So, I spent a good hour at the torch and the two beads about were the result. both of the focals are about 25mm long, about 18 mm wide and about 10mm thick. A nice size for a pendant.

I promise to get busy finishing up some of the vessels and pendants so I can post them for sale soon and get my website updated.
Posted by Maryanne at 12:31 PM

OMG - They are STUNNING!!! Everything you do lately is amazingly gorgeous.
The one with the starlight mint? That should be a fertility pendant, don'tcha think?