Finally! Some time on the torch.

I finally sat down at the torch on the last day of 2008. I had received some new glass in the mail(my Christmas present to myself) a day or so before. 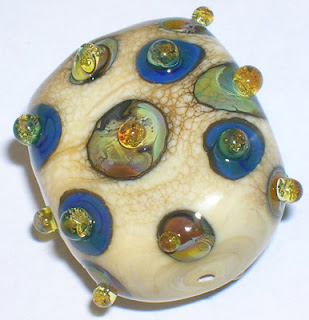 I read up on the glass that had so intrigued me and sat down to try some of it out.

The base of this bead is regular old dark ivory.

The dots are two new (to me) colors. The gorgeous blue one is called "dense iris blue" and it is truly such an intense color, the name fits it perfectly.

The other dots, which range through many shades of amber to blue to green is called "silver brown". It reacts strongly with different colors and varies depending on the application.

The little raised dots, some of which are undercut probably because it's been so long since I was at the torch and also because this was just an experiment and never was intended as a salable bead, are also made of silver brown. Leaving them raised and just reducing them slightly made them strike to this golden color. 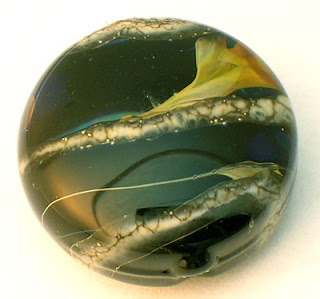 The one to the right is another example of silver brown with a much different outcome.

The base is black and I understood that silver brown on black would turn brown and green. Well, it does, but they are transparent, so it is very hard to see them!

In the right light, if you hold your head just so, you can see some of the hints of electric blue.

I'm not sure where the wispy inclusion came from, but it is about the most interesting thing about this bead, with the exception of a strand of silvered ivory I put down between the stripes of silver brown... 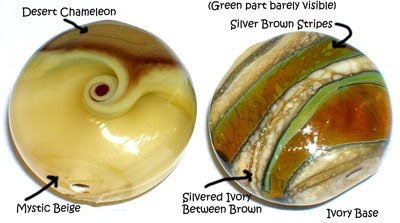 This is what I like to do with my experiments with new glass. I have a notebook of ideas and inspirations. After saving pictures by themselves, sometimes I will label them like this so I know what I did to get the effect. The Mystic Beige is a new color and I tried it with the desert chameleon. I'm afraid the beige overpowers the chameleon, but maybe I'll try it again. The striped one is much more impressive in this photo. In real life, the green stripes are hardly noticeable! 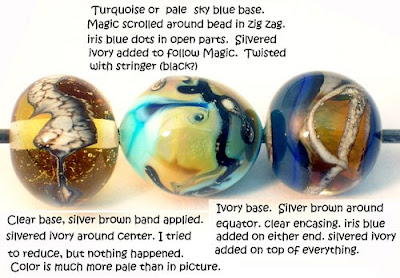 I was getting tired by the time I started working on these and they are just small round beads that I decided to use for experimentation. The one in the middle seems to be the favorite!
Posted by Maryanne at 4:47 PM