I can't believe I've been away for so long. The foot has still been sidelining me a bit and along with that, I can't seem to remember my camera when I do go out.

I did learn some new editing tricks in Photoshop and today, I finally took a bunch of pictures of recently made bead sets and vessels.

The first set is called Seafoam. It is periwinkle, swirled with a transparent turquoise. On top of it all is a complex cane stringer of a number of white streamers mixed with clear.

This one is called Tortoise Diamonds. It is one of my favorite frits on transparent topaz. The reaction is really nice and forms a kind of tortoise shell pattern in topaz and greens. I put the diamond beads together with some pea green round beads and the combo is great.

We've had an amazingly mild winter and it seems we are now headed for an early spring. This set is called

"Spring has Sprung" and it is such a cheerful combination of grassy greens and pinks on peachy pink transparent "Kalera" beads. The pink spacer beads pull it all together.

Do you notice how the beads in all these pictures seem to float and stand out in sharp contrast to the blurry backrounds? That was the new application I learned in Photoshop. Masks are very cool! 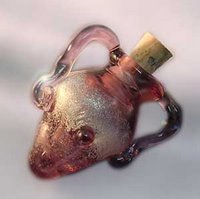 I called this "Pixie Dusted Amethyst" because that is how it was made, but I think a better name would be "Iced Amethyst".

I was experimenting with the pixie dust - actually it is mica which I happened to have from some soapmaking experiments and when I realized that pixie dust is really just mica, I tried it in a new use, with glass, and was quite pleased with what came out of the kiln.

The Iced Amethyst is probably my favorite photo today. 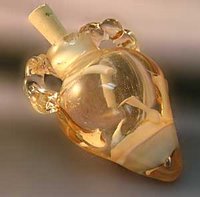 This is "Peach Implosion". An implosion is when a bead is decorated from the inside... sounds more complicated than it is, but it made an interesting vessel. The stripes on the body of this vessel are actually inside the hollow vessel.

Lately I've had a difficult time sitting at the torch long enough to produce a decent set of beads.

Yesterday, I managed to make the sets at the top of the page. At the end of the month, the Sizzlers will again be sharing a table at the York Intergalactic Bead Show. I was hoping to get some new things made for the show and now it looks like I may be able to reach that goal.

I'm feeling a bit uninspired with the names of the beads and the vessels, so if you have any suggestions, I would certainly welcome them.
Posted by Maryanne at 1:01 PM

What can I say except **DROOL** and wipe off my wet keyboard :o)

How is that foot doing now? Hope to talk to you soon!