When I was in elementary school, we presented a play called "The Unusual Season". It was about the odd weather events that occur outside of the time frame when it would be expected.

Well, apparently, we are living through one of those unusual seasons. This has been a mild winter and for the past few days, we have been enjoying some extremely warm, totally unseasonable weather. Of course, on the other hand, it snowed over the weekend in the desert southwest! 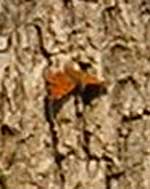 My sister and I took an early walk through the woods on Sunday and saw butterflies! Two of them flitting about. I tried to get a closer picture, but this was all I could get. They would settle on the side of a tree or hang from a naked shrub. On first settling, their wings were spread and then they would close and the butterflies seemed to disappear.

Not only the butterflies were ahead of schedule. I went out early and the birds were singing their heads off. Apparently they have taken cues from the weather and have become twitterpated! They are calling to each other, swooping about in pairs and checking out the nesting sites. 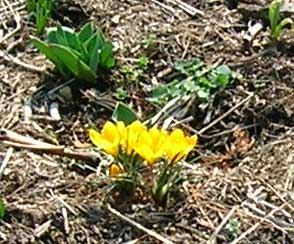 The crocuses are blooming and the daffodils on the south side of the shop are about to pop - only two weeks early! Oh, and I forgot - the bugs are also buzzing. We have an abundance of flies here (yuck) and I'm sure I saw a mosquito in the house over the weekend.

Well, I hope all the flora and fauna have a plan B. We were expecting a drastic change in the weather on Monday and overnight. Yesterday, we were in the 70's - almost 80!

This change has been moving across the country causing tornados and golfball sized hail. I was hoping that it wouldn't be so violent by the time it gets here, but a 40 degree (F.) drop in temperature was expected.

I guess this will continue to be a roller coaster ride. If we are to have previews, this is the best kind. It's been so lovely to wake up in the morning and go outside to drink a cup of coffee on the patio. 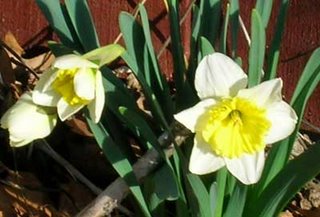 I was surprised this morning to find we had a slight sprinkle overnight and the winds have picked up quite a bit, but the temp is still in the 50's... Overnight, oddly enough, the daffodils have opened.

Later in the week, when we have snow (maybe!), I'll post a few more pictures.
Posted by Maryanne at 1:40 PM

I think that looks like you may have a bigfoot on that there tree. It's hard to make out, but if you tilt your head, cover one eye and squint the other, you can just about make out his features. Or it might be Elvis...