I have an order for soap beads to start working on, but as I waited for the kiln to ramp up, I saw something on the windowsill that I had never shown on here before. 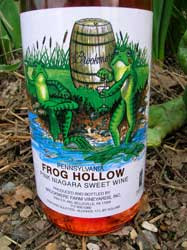 When we were doing the PA Farm Show in January, there were a number of PA wineries set up nearby.

Near the end of the show, we were starting to look for boxes to use to take our left over soaps home and saw they had a lovely stack of empty wine boxes. When I returned to pick some up, I saw this label!

The Chistmas tree farm that we operate here is called Frog Hollow Evergreens. We named it Frog Hollow because when we moved here, the frogs who lived in the pond (in the "hollow") were so loud that we couldn't hear the TV in the evening when the windows were open! It stuck and gave a touch of whimsey to the place. We have acquired a raft of frog memorabilia over the years and so... 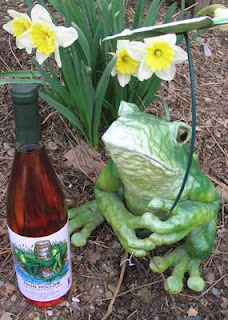 Well, despite the fact that we don't even drink alcohol around here, I felt the need to purchase a bottle of the wine, for the label alone!

Today, when I saw the bottle of wine sitting on my windowsill and looked outside at the frog garden sculpture that my brother and his wife had given us for Christmas a year ago, I thought they just belonged together - along with the gaily blooming daffodils.

The wine is made, in Pennsylvania, by Brookmere Farm Vineyards and they describe it this way: Frog Hollow (sweet blush Niagara)- A blend of foxy, flavorful Labrusca and French hybrid grapes to create the blush wine symbolic of Brookmere Farm. Named for the creek which runs between the vineyards.

I did taste it at the Farm Show and although it is a mite sweet for my taste, I imagine it would be nice as a dessert wine for those who imbibe. The man who sold it to me said it was a best seller for them. For me, the label was enough.
Posted by Maryanne at 9:20 AM

How funny is that?

Here is a bit of info I never told you...I have a very good friend in California who lives right off of a "Frog Hollow" road. I always think of you both together when I hear "Frog Hollow". You both are very special to me, so "Frog Hollow" makes me smile. :)