What were we thinking???

Why can't we "get it"? Whenever we have been invited, or should I say lured, into participating in a show, we are always sorry! And yet, the possibility of it turning out well reels us in every time.

We may have actually hit the wall this time.

Here's Tina behind our latest disaster! We agreed, on very short notice, to do a show which was supposed to be attended by 650 teachers. They did say the teachers were religious pre-school teachers, but knowing that teachers are usually a really nice buying group, we decided to go.

We set up for the show on Thursday and within a very short time realized this was not our crowd. Not only weren't they interested in soap, herbs or jewelry, half of the attendees had canceled because of the snow forecast. A waste of time is not all that bad, but coupled with the worst snowstorm of the year it isn't the best idea we ever had!

Of course, as always, we slogged along and, attempting to be professional, we appeared as promised on Friday morning, even though the weather forecast was clearly correct and it had already begun sleeting ahead of time. The roads were warm though following our previous few days of warm temps and sunshine, so we figured we would be driving home in mostly slush after 4 when the show was over.

By 10 AM, it was clear that the warm roads had already cooled down and the snow was starting to fly thick and fast. I asked the organizer if, since we were doing nothing businesswise, she would mind if we left early since there was no reason to risk life and limb trying to get home later. She asked that we wait 'til 2...

All through this, Tina was attempting (without success) to contact the school transport to make sure that her daughter would be getting a ride home since she has been staying late for after school activities for the past week or so and had not been scheduled to ride the bus.

So, we waited - anxiously checking outside from time to time and condensing our display and hauling parts out to the car as unobtrusively as possible.

Shortly after 1, my husband called and said that if we couldn't leave soon, we might as well plan on staying the night... That was the final straw, since he NEVER worries about snow. We packed up and left.

We live north of the location of the show and with every mile, the extent of the storm became clearer and clearer. The closer to home we got, the fewer plows had apparently ventured on the roads until, the last few miles had not been touched. I was never so happy to have a 4 wheel drive vehicle before in my life as we drove through 5-6" of unplowed snow.

About 1/2 mile from home, we encountered a school bus stuck sideways across the road. The driver was not even attempting to move it and we saw one lonely set of tire tracks which had driven around the bus - on the neighbor's yard. We finally decided to try it for ourselves and after we passed the bus, we stopped. It was Molly's bus... she hopped out of the bus and into the car. Tina went back and asked the driver if there was anything she wanted us to do and suggested she might want to pull in the driveway just behind her.... no she wanted whoever came to pull her out to SEE the conditions(!) Despite the fact that we were on a hill, my perky little RAV just took off and carried us home. 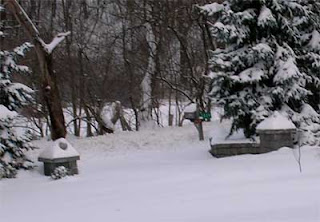 After dropping Tina and Molly at their house, I decided rather than attempting to use the road I'd just drive through the fields and trees to get home - it was all downhill right into the garage. I'd used that tactic before and it was a good thing. The picture here is what the entrance to our driveway looked like!

It was an adventure and I must say the adrenaline rush was quite invigorating. Since nothing but an unusually hefty(to me) table fee was lost, the outcome was even somewhat invigorating! 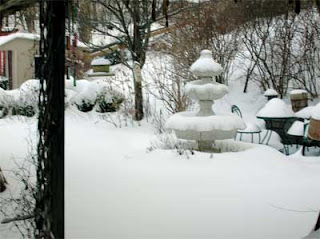 This morning, when I peered outside, this was the scene out our back door.

Our little pretend "piazza", so cool and inviting in summer, had become the garden of an ice palace!

The snow, so far untouched, was gorgeous and sitting in the warmth of our gas fireplace was very pleasant. I always love snow when I don't have to go anywhere in it.

Bob got out during the brief sun this morning and plowed the driveway which is now bare. The roads are clear.

Tina showed up a few minutes ago to retrieve her car which she had left here Thursday afternoon. 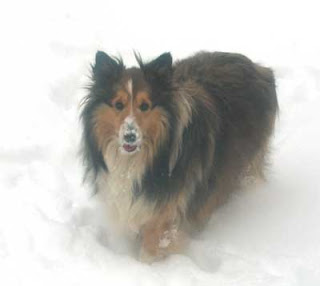 So, once again the moral of the story is - never attend a show when the organizer calls at the last minute, they're just trying to fill space and it's not going to be a good show for us. We know which ones work and really need to stick to the tried and true.

And, if there's even a hint that there might be fowl weather - forget it!
Posted by Maryanne at 11:05 AM

Ha! You were out in that muck too?

I was down in Annapolis until 6:00 and didn't get home (luckily safely) until 9:00!!! But I can't gripe though because I got to drive on populated highways...where I probably would not have ventured out around the farm where you are! Brave girl! HUGS!!!

You mean foul, don't you? Those chickens are really starting to get to you. And the guineas, and the other fowl all over the place.

Love the driveway shot. However did you get that?