So many ideas going through my head - and in so many directions! 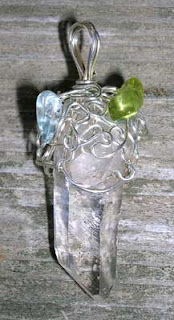 First, I had a really nice response to the wire wrapped focals I showed last week, and it was suggested that I try wrapping crystal points the same way.

This is just a small one, maybe an inch or so long. It had a nice uneven "glob" on the top which made it really easy to catch up into the wire.

I'm not showing the first one I tried. First, it didn't photograph well and second, it was large and in my opinion, it looked overdone. I tried wrapping it in a figure eight and adding a number of stones and coils. Well maybe I'll show it later(!) and you can draw your own conclusions. I suppose in the right situation it could be appropriate. 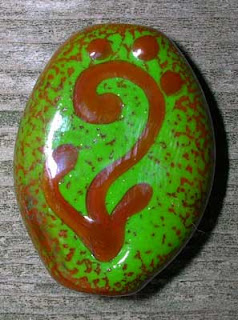 The second is a bead which was inspired by something I saw online yesterday. I actually tried to copy the bead I saw, but got a somewhat different result. The one I was (yes) copying had a mossy look to it, but mine came out of the kiln looking like a piece of redware pottery.

My first reaction was that it would be perfect strung up with some of Tina's herbal beads and I'm definitely going to do that, probably with a charm that says "Grow".

My second reaction was that this is a direction I would like to follow, adding other colors and making a whole collection of redware beads. Redware pottery is an art form that is closely associated with our area. It involves the use of colored glazes, painting with slip (colored, liquid clay) and sgraffito (scratching a slip-covered piece to expose the red clay underneath) . We have a few plates commemorating our marriage and our son's birth with beautiful PA Dutch designs on them that were made that way and this has the very same look.

Having just signed up for yet another charm swap with the theme of "Hometown", I think I know now how to handle it! My first thought was red roses, for Lancaster, the Red Rose City (after the English War of the Roses, Red for Lancashire and White for Yorkshire). Another idea was some sort of quilt design, but now.... I think it will be redware.
Posted by Maryanne at 8:21 AM