Well, all I have to say today is that the next time Tina says, "Looks like we have a clear weekend ahead", I'm going to smack her!

I'm going to ramble on this one, so be prepared!

We were planning a quiet weekend, with a few Christmas tree taggers and a little bit of prep for a visit to a customer for restocking on Monday. As it turned out, we spent the better part of Friday night and Saturday early morning in the hospital with our brother and I wound up spending the rest of the day and night Saturday in bed - when I wasn't worshiping the porcelain idol in the bathroom!

Brother John had apparently become dehydrated and since he is taking diuretics, it was a serious situation. Let's just say that when I saw him trying to hang his cell phone up on the chandelier, it was obvious there was something wrong. I called Tina and we hauled him in to the hospital where they hooked him up with not one, but two IV's. We were really worried because by the time we left on Saturday morning, he was unable to articulate a clear thought and had begun speaking gibberish. As it turned out, though, everything happened in the best possible way as it seems to every time something goes wrong with John, so we figure Mom is still at work watching over him.

When I called in to the hospital around 7, he was almost back to his normal self and making sense, so apparently my body took that as a signal to evacuate.

I think there is a GI bug traveling the circuit and my DH & I both had it! It was like the flu and we both took to our bed to sweat it out. Luckily the kid was home and could take care of the few people who showed up to tag trees.

Today, all is well. Brother John is sure he will be going home tomorrow, but I doubt that they are in the habit of releasing patients directly from intermediate intensive care. It's okay, he still isn't sure what month it is, so until he is..... it's best that he stay where he is. Bob and I are well on the mend and the kid is back at school.

I do have a few goodies to show. (I was planning to do this earlier, but life got in the way!)

I've been working with Dark Silver Plum, a really nice color that I have never been able to work with properly and probably didn't photograph very well either.

Anyway, the other day, something clicked and I achieved the great silver sheen that it is supposed to have. I liked the idea of a light color encasing white and then making the scrolls on top of it all.

The peach colored bead is called "Wrought Iron Peach" and the blue one is just called, "Blue Note".

You may notice I have been playing with Photoshop - mainly because the photos weren't that great. I was doing some experiments with masking and wound up with some smoky clouds around the green bead and so, I named it "Jack's Beanstalk"!

Then, I got carried away and tried some dichroic glass with this technique and wound up with "Captured Dichro", to the right.

The picture actually did pick up the flashes in the dichro layer, so at least I am pleased with that.

Finally, while I had the silver plum out, I thought about making a heart with silver rivets in it and tried to tie them together with black strings. 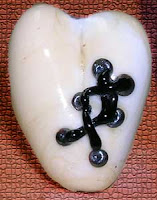 I wound up with "Mended Heart". I have the feeling it may lead to something really good. This one is kinda boring! I did have fun doing the background though. Photoshop is fun!

Anyhow, since Thanksgiving is on its way, it is time to count my blessings although I truly do that every day.

It's been a strange year, so many things could have gone so horribly wrong and yet we survived and flourished.

Despite everything, the business moves along, we are lucky to have the time to take care of our brother and go along with him for his check ups. The magazine is almost ready to go to the printer because for some reason, I decided to get started on it early this issue. My DH has survived his small stroke and made life style changes so that he'll be around for many more years. Our son has been accepted to the Grad school he was hoping for although it may mean we won't see him for a year or two since it is about as far away as it can get.

Just last week, I said that I didn't want to change things this year since it may be the last chance we have to all sit down together. I was thinking about our son traveling, but (not to be maudlin) as we all get older, it is becoming more and more of a possibility that each holiday may be the last we will all have to get together.

I have the feeling that we will all sit down together at the Thanksgiving table this year and be especially grateful for our many blessings.
Posted by Maryanne at 6:03 PM