When I was very young, I decided I would NEVER cook a turkey. After watching my grandmother prepare various holiday dinners, I was horrified by what seemed to be a really gross and messy job. (I suspect that in those days, the giblets weren't packed up in a nice neat bag as they are now.)

After I was married, I worried that someday, I was going to be expected cook a turkey and though I avoided it as long as I could, I realized that since I was the one who had the time, I should really be the one to make holiday dinners.

Bread stuffing, is the way we have always traditionally stuffed turkeys in our family. And the stuffing should be solid enough to be removed from the bird and sliced. I remember going up to Aunt Mary's house after Christmas and being served cold sliced filling with hot left-over gravy and thinking it was a very special treat.

As luck would have it, something like 30 years ago (which is how long ago this happened,) either Woman's Day or Family Circle magazine published an article on Thanksgiving dinner which included a chart of stuffing recipes and also instructions on how long to bake the bird.

The bread stuffing recipe looked about right and, sure enough, everything turned out perfectly.

Stuffing the turkey has become one of those weird traditions with my DH and me which I have probably discussed here before. There's something very companionable about being in the kitchen early in the morning, chopping and cooking together to prepare a wonderful meal.

We still stuff our turkeys and (after calculating the approximate cooking time) we do it early in the AM, put the turkey in to cook immediately and it is usually ready at almost the time we expect it!

I kept the original pages from the magazine, but they have become brittle and yellowed. I encased them in plastic and keep them around for old times' sake, but I have transferred the information to a computer file and today, I made it into a jpg which is shown here. 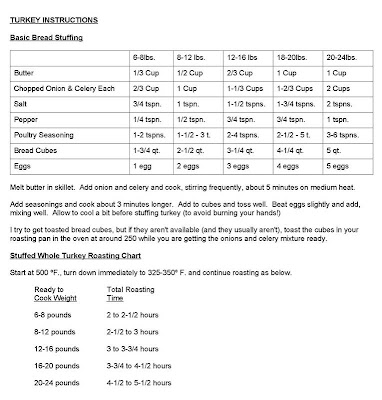 If you are interested printing it out, Just click on the picture and it should come up in a separate frame. Then choose print from the file menu above and it should printout for you in a readable size.

I've never seen an article again that laid all the information out so simply and I'd love to know that I have passed on something that has been very important to me through these many years.

11-25-07 I added a picture of our turkey this year. It was actually overcooked (as you can see the wings fell off!), but it was one of the best we ever made. I think giving it an extra half-hour will become a new tradition.

When we put it in the oven at 500 F., we didn't turn it down for maybe another half hour so that it was golden brown almost immediately. We tented it and turned it back down and it seems all the delicious juices were sealed in for the duration! Oh, and I had more gravy than ever before - it was perfect!
Posted by Maryanne at 8:48 AM

Thanks Maryanne this is a wonderful recipe and I'm glad you posted it for those of us that would like to print it. You're a sweetie and I miss you!