Fresh from the Kiln

I guess I'm a little excited about this bunch that I pulled from the kiln yesterday. 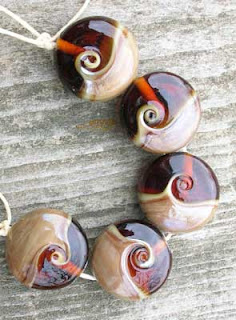 First the full set of the swirled beads that I mentioned yesterday. I'm calling them Taffy Swirl and I guess I'll just take them along to possibly sell as a set at the show this weekend. If they don't sell, I have some plans....

Next a good-sized focal. I was playing with the pleated bead technique but I think I stretched the pleats so far that they just disappeared! 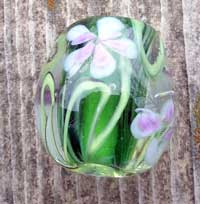 Actually, they're still in there, but very faint. I added a few stems and then the little flowers of pink and purple. When I pulled it out of the kiln, I was reminded of the beautiful little pink and white "Spring Beauties" that grow in our woods in early spring. It's a chunky bead, but the flowers on it are so delicate that it has a dainty feel to it. 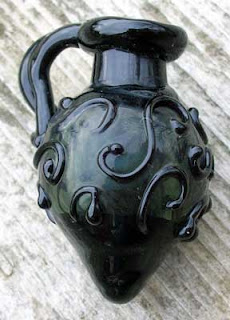 Since I recently sold the black vessel on my website, I decided to make a new one. After the basic vessel was finished, with opaque top and bottom and a transparent "belly", I picked up a tiny black stringer and began scrolling curls all around it. My black vessels always wind up being called Midnight something and looking at this one, I immediately thought, "Midnight Lace". Isn't that an old Elizabeth Taylor movie? Whatever, it's a somehow "voluptuous" vessel! 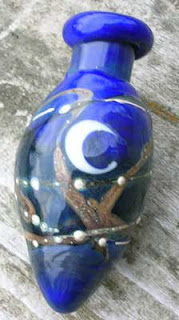 Finally, I made some silvered ivory stringers, cut some pure silver wire, pulled out the Lapiz and transparent cobalt and started playing. This was the result. It looked like an interesting night sky with stars and comets streaking through it. I added the moon to glide serenely through it all.

I made a moon vessel a few years ago and it was always one of my favorites, so I'm happy to have a new one to add to my stash! Before I add it to my website, I'll wire it and add a few adornments.

We're having an overcast day today and the pix aren't the clearest I could hope for. When the sun comes out again, I'll get some better shots.
Posted by Maryanne at 10:47 AM 2 comments:

Well, it's been a busy week. For some reason, I got a cleaing bug and managed to get the house in really nice shape.

Delivered orders, took care of a lot of details I've been ignoring, made some soap and even managed to visit the new slots casino!

I also sat down and torched for the first time in a while and almost everything I made was a success. 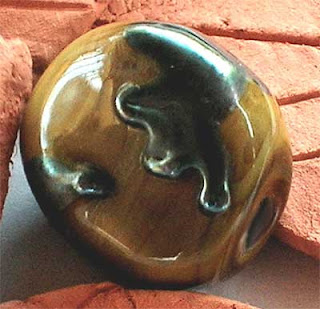 For one thing, I tried blowing shards. I've been seeing some really beautiful things online made with dark silver plum shards and so, I got out the hollow mandrels I bought for a class that never came about and used them to blow shards from Dark Silver Plum.

This bead is the result of applying shards to a caramel apple bead and then reducing it to bring out the metallic sheen of the shards. 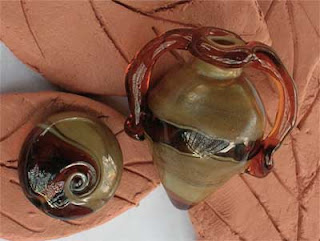 Then, I worked with some of the glass I bought last summer at Beadfest from Wale Apparatus. This vessel and bead are made with a combination of Desert Chameleon and Dark Topaz transparent. The Desert Chameleon has a bit of an almost opalescent gleam about it and the topaz, as always is just liquid amber... I'm very pleased with it. I finished another 4 of the beads, so there are now 5 of them which will make a great bracelet or an interesting necklace to wear with the vessel.

I made a couple other new vessels yesterday along with some other beads, but haven't had a chance to photograph them yet, but stay tuned, because I think they are a couple of the best vessels I have ever made!
Posted by Maryanne at 9:27 PM No comments: 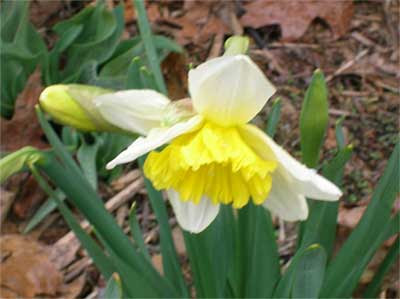 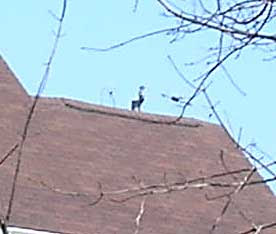 The realization of the optical illusion gave way to lots of laughter and stopped us speculating on the "luck" of a heron on the roof - as opposed to a stork!
Posted by Maryanne at 8:48 AM No comments:

We've been slogging along through the winter, taking care of what we need to do, keeping up. We kept expecting things to break loose, but they seem to be starting up a little later than last year - at least in the soap business... But, we did make sure that the soap stock was in order...

So, the orders start coming in.... Tina's putting a new book together, which means I'm laying it out. Oh, and the magazine deadline was the 15th, so everything comes to a halt while that is put to bed.

Now, I'm spending most of my time on the computer while Tina is making sure the soap orders are getting out.... Talk about cross training!

Of course, I signed up for a swap which is a little something to work on in my spare time... and I'm downright neglecting the torch!

It's going to be a strange, early Easter this year. It seemed to have snuck up on us along with all the other holidays this week! We've decided there won't be ham for Easter this year - one non-pork eater and (at least)one low-sodium diet, so we think it might be Salmon. Well, at least it's pink - sorta like ham! Oh, and it's on sale.

We've been really lucky with our winter weather this year, but now it's been raining for two days and it's getting old. I know I shouldn't complain because there's so much more rain in other parts of the country, but I will anyway!

Well, this is probably one of the worst blog entries I've ever made. I just felt the need to blog and had, as you can see, very little to say!
Posted by Maryanne at 4:47 PM 1 comment:

It isn't much, but at this time of the year, it doesn't take much! It's been raining and ugly. This has been a somewhat mild winter for us. No snow, but cold, raw, rain and ice... 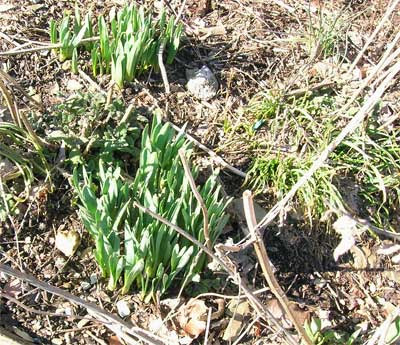 Today, the sun finally came out and I happened to look down as I walked out the door of the shop. There were these lovely daffodil leaves coming out of the ground. Bulbs are the promise of spring.

I had some errands to do around the area and noticed the lawns and fields just starting to "green up". I love all the seasons, but spring has to be the best.
Posted by Maryanne at 7:31 PM No comments: