No, this is not a cooking blog, although the past few days I have been doing a lot of cooking.

I wanted to pin this recipe, but there was no picture to go with the recipe on Cooks.com, so I needed to post it here along with my own picture! 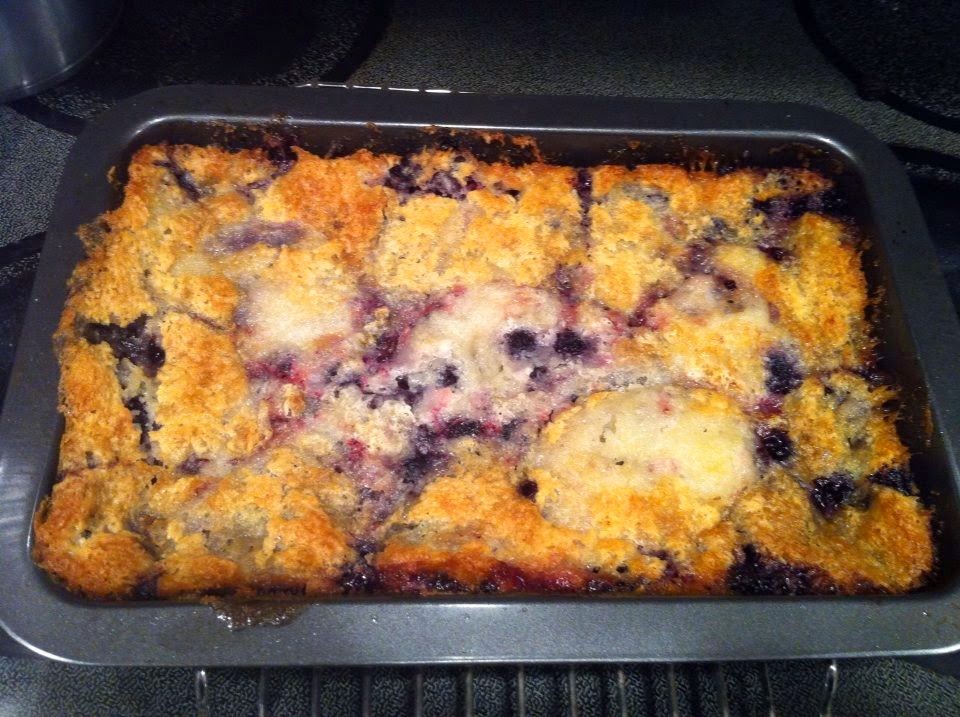 This is a very flexible recipe.  I had some raspberries we had picked over the past few days - not quite enough for a pie, but more than called for in this recipe. I added them all.  I read it incorrectly and added all the sugar to the batter, still added some on top.

It was quite sweet, but we remedied that by serving it with ice cream!
Posted by Maryanne at 12:03 PM No comments:

There are so many things going on in the summer.  Perhaps I should start sharing again! No promises but here we go...

First, since this could be the inspiration for a bead at some point, I will share this picture of a beetle that was crawling around on the gas pump this afternoon when I stopped to fill the tank.  Isn't it beautiful? 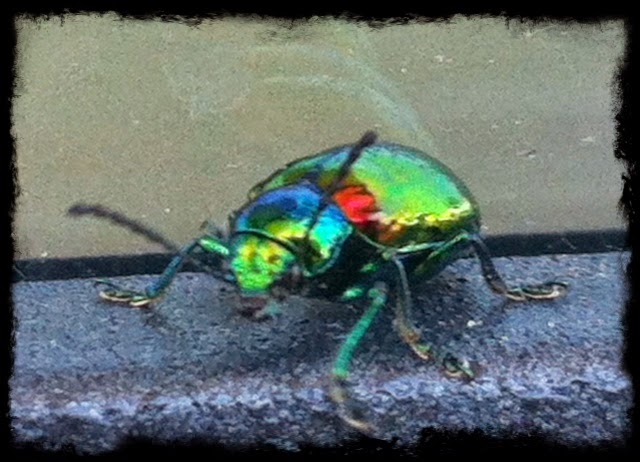 But, the real thing I wanted to share today was a recipe.  Years ago, at the Landis Valley Herb Faire, Friday night was a special reception - not really open to the public, just for press and specially invited guests. I forget what food was served, but I do remember the May wine!

The event as a whole was much, much smaller than it is now and there was also a special herbal luncheon served on the day of the event. I believe it was all free to the vendors too.

I was mulling over various salads and other sides to make for our little 4th of July celebration and remembered that I had the recipe for this wonderful zucchini/orzo salad which was one of the most popular things I think they ever served at Landis Valley (except for the wine.)

My basil was ready, so I picked up the ingredients I needed and put it together.  You may want to try it too. 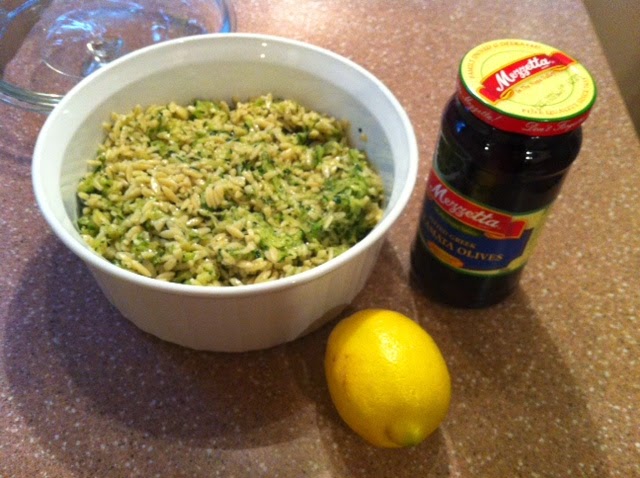 Drain grated zucchini in colander. Sprinkle with 1 T salt.  Let drain 30 min.  Stir or shake twice. Squeeze dry. Transfer to large bowl. Fluff with hands or fork to separate.
Basil and olive oil in processor 1 minute, drop garlic in and blend.
Add basil mix to zucchini.
Bring chicken broth to oil in medium saucepan.  Stir in 1 T salt and orzo.  Return to oil. Simmer 10-12 minutes until orzo is tender. Drain.
Stir orzo and zucchini mixture together and cool to room temp.
Just before serving, stir in lemon juice and zest (if desired.) Season with pepper. Garnish with olives.
I will cut the olives into halves before adding.

I only made half this recipe and I have shown it in my middle sized casserole dish so you can see how much it makes.  If it turns out as good as I remember, I should have made the full recipe!  The lemon and olives are waiting to be added.

Reading Facebook yesterday afternoon and this morning, it seems everyone has a connection with Maya Angelou.  She touched so many people she never met.  She inspired me and serendipitously led me down a path I had sort of forgotten.

About 12 years ago, I signed up for a soap swap on a Yahoo list I belonged to.  It was a kind of low point in my life and I had decided to get involved with, at least, some people on the internet. The woman in charge of the swap called it the Phenomenal Woman Swap and we were to design soaps and packaging for a soap inspired by that poem by Maya Angelou.

Here is the poem and pictures of the soap (packaging) it inspired:

Pretty women wonder where my secret lies
I'm not cute or built to suit a model's fashion size But when I start to tell them
They think I'm telling lies.
I say
It's in the reach of my arms
The span of my hips
The stride of my steps
The curl of my lips.
I'm a woman
Phenomenally
Phenomenal woman
That's me.

I walk into a room
Just as cool as you please
And to a man
The fellows stand or
Fall down on their knees
Then they swarm around me
A hive of honey bees.
I say
It's the fire in my eyes
And the flash of my teeth
The swing of my waist
And the joy in my feet.
I'm a woman
Phenomenal woman
That's me.

Men themselves have wondered
What they see in me
They try so much
But they can't touch
My inner mystery.
When I try to show them
They say they still can't see.
I say
It's in the arch of my back
The sun of my smile
The ride of my breasts
The grace of my style.
I'm a woman
Phenomenally
Phenomenal woman
That's me.

Now you understand
Just why my head's not bowed
I don't shout or jump about
Or have to talk real loud
When you see me passing
It ought to make you proud.
I say
It's in the click of my heels
The bend of my hair
The palm of my hand
The need for my care.
'Cause I'm a woman
Phenomenally
Phenomenal woman
That's me.

I loved the poem.  I repeated parts of the poem in my head as I worked on the project. It not only made me feel good about myself for the first time in a while, but it inspired me to make a phenomenal soap.

The soap was a dark mauve with veins of gold running through it. It was scented with an exotic combination of oils that I still love.

I decided to bead the bags - they weren't available like this at the time and so I set about to make them special.

The swap was a hit and I received a number of nifty soaps and compliments in return, but the biggest thing that happened was that I got some of my confidence back and was inspired and started beading again...  I bought a number of books about bead weaving and eventually attended Beadfest, just outside Philadelphia.

At Beadfest, I saw a demonstration of enameled beads made with a hot head torch on copper tubing.  It was inexpensive compared to lampworking and so I bought the kit.

A week later, I realized how limiting the enameled beads were and signed up at a local glass shop to learn lampworking.  A month later, I had bought and set up my minor torch and kiln and was in the bead business!  Well, at least I was learning.

So, you might say that Maya Angelou led me to bead making and jewelry making.  Thank you, Maya - and farewell.