As the days grow short...

November is here and it means many things... In Lancaster County, one of the things it means is the Amish wedding season.

Yesterday, while we were making deliveries in "Amish Country", we passed a farm that usually has a unique Homemade Root Beer sign out at the end of their driveway and noticed that it was covered with a cardboard sign that said "Closed until Weds." We looked down the lane at the farm and saw this:

All those little grey boxes on the left of the buildings are buggies. I cut off a few other vehicles. There were also some vans, called "Amish Taxis", driven by "English" drivers that apparently brought some of the guests from farther away.

This was a HUGE gathering. The 3 wagons I have marked are called bench wagons. For Sunday church services, these bench wagons carry a number of benches - seating - to whatever home is hosting church that week, but church normally only requires one wagon. This was a number of congregations combined.

I worried that it might have been a funeral, but Tina remembered that this is Wedding Season and that the Amish weddings usually take place on Tuesdays or Wednesdays, so it was most likely a joyous occasion for this large gathering.

Another thing that often happens is that we do some experimentation with various products. Usually this is done after the Christmas season here at Frog Hollow is over, but, last night, I decided it was time to try once again to try make liquid soap. I have a couple of projects that this was needed for, so I gave it another shot before I broke down and just bought some ready-made. It seems to have worked out pretty well. I read (and followed) the recipe better than the last time. I saw the reasons for some of the things that were changed from making regular cold process soap and decided to try to go against some hard and fast rules we have always followed. 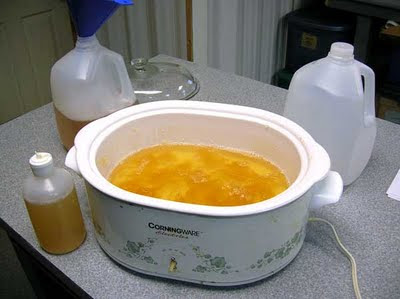 I poured off some of the finished soap and tried it out. It is NOT finished soap and feels pretty harsh at this point, but give it a couple of weeks and it'll be fine. The stuff in the crock pot is the left over paste which has not melted this morning. I added some more boiling water and will now let it sit, covered so that it will dissolve and become a nice amber liquid...

I'm actually pretty proud of this batch. Apparently I superfatted the previous batch I made and it never was completely clear and separated almost immediately. We'll see how this goes.

Finally, as I walked out to the shop this morning, I noticed we had a frost last night and it was just beginning to melt. These are the fairy soap balls I have stuck in the planter outside the shop.. 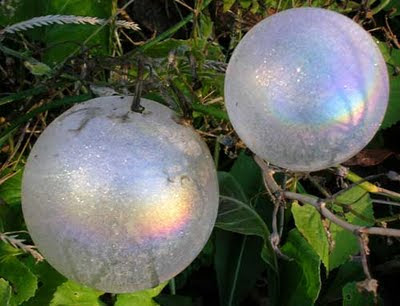 These always look magical to me, but the frost adds another dimension!
Posted by Maryanne at 8:37 AM 3 comments: