So, my DH identified our bizarre visitor as an Imperial Moth.
From the Auburn University website: 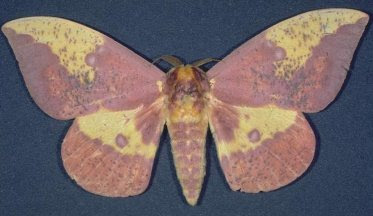 The imperial moth is distributed throughout the eastern United States west to Texas and Kansas. The caterpillar feeds on foliage of a variety of broadleaf and coniferous trees. Some common hosts are oaks, sweetgum, sycamore, elm, hickories, walnut, maple, basswood, honeylocust, pines, red cedar, and bald cypress. In Alabama, the caterpillar is found on both pines and hardwoods.

The insect spends the winter as a pupa in the soil; adults emerge in spring. The adult is a large moth with wingspread of 100-150 mm. It is sulfur yellow, marked in varying degrees with lilac to purplish-brown bands and spots. Females lay large yellow eggs or in small groups on either surface of host leaves.

The full-grown caterpillar is 75-100 mm long. It occurs in two color forms, green and brown. In the green form, the head is orange-yellow with vertical black or dark stripes on sides and front. The thoracic legs are yellow. The body is green and thinly clothed with long whitish hairs. The second and third thoracic segments each bear a pair of stubby, rough yellow horns, and rows of smaller yellow spines occur along the body to the rear. The last abdominal segment bears conspicuous yellow and black triangular plates. The spiracles along the sides are large, oval and pale yellow to cream in color. In the brown color form, the body, horns, and spines are tan to reddish brown. When fully grown, larvae leave foliage and pupate in the soil. Two broods may possibly occur each year in Alabama; however, the caterpillar is most commonly seen in August and September.

The imperial moth caterpillar is a solitary feeder. It may occur on any of the many host trees, and is usually encountered most commonly in late summer and fall. These large larvae individually can consume a lot of foliage, but are seldom present in sufficient numbers to cause serious damage. Large, colorful, and armed with horns and spines, the caterpillar may look fierce and dangerous; however, it is harmless and does not "sting" or stab man.
Posted by Maryanne at 8:33 PM 1 comment:

I know I've been quite remiss in my posting, but I finally saw something that inspired an immediate post. We were just walking up the hill and a beam of the setting sun seemed to draw my attention to something that I could hardly believe was some type of caterpillar.

Still not quite sure what this is - I'm suspecting a Luna Moth larvae, but whatever it is, it's huge: 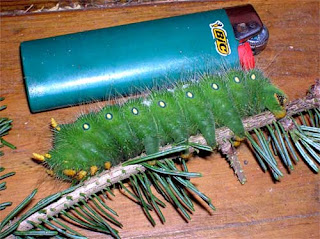 I took a shot of it next to a lighter to show the size. 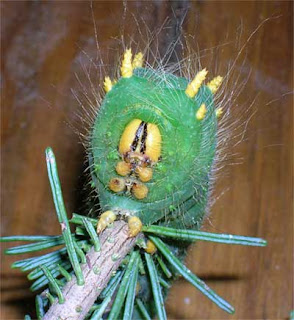 We think this is the front/head end. 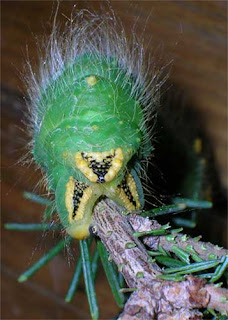 And this is the hind end.

If and when I figure out what it is, I'll probably edit this to identify it, but I just had to post it right away!
Posted by Maryanne at 7:15 PM 1 comment: