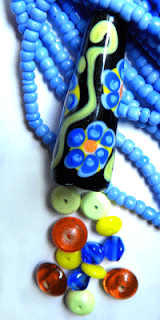 This should be from Cinco de Mayo, but these beads only appeared in the past few days, so ... better late than never!

I started out with an idea... bright colors on a black background, inspired by a set of beads in a gallery online.

At first, looking at this "set" of beads, I thought, PA Dutch. But, as I looked at the a little longer, I was reminded of the beautifully embroidered Mexican blouses. Usually, the designs are on unbleached muslin, but sometimes on black... So, these are my PA Dutch/Mexican beads! It made me think of my lampworking friend, Rachel, who is of Mexican descent and how when we get together (me being PA Dutch), fun and pretty things result.

One of the beads that came out of this effort was a cone bead. I plan to string it as a pendant with a cascade of other beads of the same colors coming out the bottom. This may give you an idea of my plan.

The entire "set" shows the cone bead along with a couple of multicolored florals, then a leaves and hearts bead. The last five beads on the strand are leaves with flowers - in pinks and turquoises.

I have a pretty good idea of what I will do with the turquoise flowered beads. They remind me of Forget-me-nots and I want to make them into a bracelet along with a stamped link...

I'll have to do a follow-up post when these are finished.

The last few times I torched, it was really for a swap I am involved in, but these beads are somewhat different from what I have been doing lately and they have inspired these differet ideas that I will have to keep at least the ones I talked about using.

Something else sort of different came out of the kiln too...

Thee are some nice round beads with silvered ivory, intense black, murinis and contrasting random dots.

I think these will be part of my swap project.

I'm liking them too and would like to make some actual sets like this... maybe all in one color!

Sets do seem to be escaping me lately. I'm just having fun experimenting and one thing seems to lead to another rather than just copying the same thing over and over.
Posted by Maryanne at 12:32 PM 1 comment:

I'm excited about this! I've seen Baltimore Orioles on very rare occasions here in our yard, usually at the top of our big old sycamore tree.

Today, as I was closing a window in the shop and covering the soap, one landed right in front of me and looked in the window!

I was planning to go into the house and as I walked out, I saw him/her(?) fly out of the purple plum right outside the shop and into the sycamore. It hung around and then sort of disappeared into a glob of what looked like dried leaves near the end of a branch. 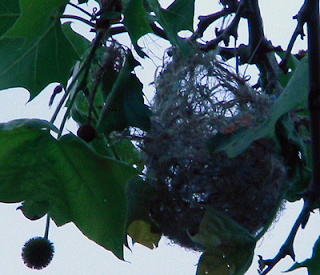 I went into the shop and got my camera to snap a picture in telephoto mode and see if it was a nest... Yes! It was. I've never seen an oriole nest in person, but have seen lots of pictures of the neat little bag they build.

From one side, it looked like some old leaves that may have gotten caught in the crook of a branch, but I climbed up the hill to try to get a better shot and this was what I got after I enlarged the picture and cropped it. I'll have to keep track of it as it is built - I think there is more to go on it to make it a secure spot for their precious eggs.

It seems to be bird day around here because this past winter, we finally lost our last Guinea hen. But this morning, Bob came home with a dozen week old chicks and set them up in a cage with a heat lamp to nurse them through the first few weeks before we can put them outside in a safe spot to become acclimated to life outside. There is a tree in the spot so they will learn to roost at night.

He also told me he has (I think) 6 silky chicks on order for next week.... Those are the fluffy white chickens. We'll be adding to the menagerie once again.

Between the loud chuck chuck of the Guineas, another few clucks to add to our chicken flock and the sweet clear call of the orioles... it'll be a noisier place around here this summer.
Posted by Maryanne at 6:11 PM No comments: