An Amazing Set of Coincidences

In the summer of 2003, our son had been accepted into the PA Governor’s School of Information Technology (PGSIT) which involved a four week stay at Temple University in Philadelphia.

Two weeks into the program, the families were permitted to come visit for the day. While he was gone, a friend from Arizona had come to visit us and we thought it would be fun to take the time we would all have together to go out to a favorite of ours, the beautiful grounds of Longwood Gardens and enjoy the day.

We had been there for hours and traveled all over the grounds. We were taking a break and I leaned my cheek against my left fist. My engagement ring dug into my face and I looked at the ring.  The diamond was gone.  My heart sank. I was sure I would never see my diamond again! 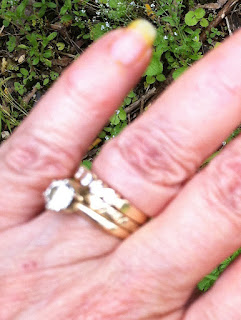 On our way out, we reported the loss to the lost and found for no other reason than we thought we should probably do so for insurance purposes.

The next day, I called our insurance company and started a claim.

A few days later, a received a call from Longwood Gardens.  Someone had found my diamond! They would be back in the area in a couple of weeks and had left a phone number for me to contact them so they could return it.

I called and as it turns out, THEIR son was also at PGSIT - and their family had decided to visit Longwood on their visiting day!  Their youngest found the shiny stone and the mother thought it was probably a rhinestone from a fancy dog collar, but took it and put it in her purse.

They were from Pittsburgh and as it turned out, soon after they got home, Bailey Banks & Biddle, the jewelry store, was having a day where they would evaluate jewelry free of charge and the woman happened by and pulled the stone out of her purse.  From what she told me, they greatly over-valued it, but it was enough that she realized it was not a rhinestone and got in touch with Longwood.

We met the family on the day we all showed up to pick up our kids and they returned my diamond.

So, if I hadn’t reported the loss..
If the other family hadn’t decided to visit Longwood…
If the mother had not decided to put the diamond in her purse…
If  she had not happened to be near Bailey Banks & Biddle during an evaluation day…
If they had not been wonderful, honest people…

When I called my insurance company, the woman I spoke with was amazed at my story..

I should mention that shortly before all this happened, I had taken the ring to a local jeweler to have it cleaned and the prongs checked.  Apparently they weren’t as strong as they appeared…   After I got the stone back, I took it back, told them the story and asked them to remount it. They suggested a 6 prong, rather than 4 prong setting and I can’t remember, but I’m pretty sure the work was done at a discount.

Because of arthritis in my fingers, I haven't been able to wear my rings for some time.  Maybe it's time to get them resized.

Posted by Maryanne at 1:15 PM No comments: