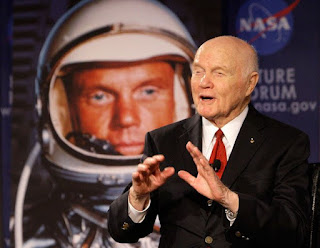 At 95, a death is not a shock, but the death of John Glenn is certainly an event. As the last living member of the original 7 Mercury Astronauts, it is the end of an era.

The astronauts were all idols in those days, but as the years have gone by, it has become clear that John Glenn was the real deal.  We have so very few real heroes any more.

I remember, as a young girl, when the original 7 Mercury astronauts were announced - heroes for our time. We followed them in the news. The excitement of the space program was a source of national pride and excitement.

I was in junior high school by the time his historic flight was set to go and remember how the launch was rescheduled over and over.  We discussed how nerve-wracking it must have been, getting geared up and ready to go time after time, only to have the flight scrubbed. The day he circled the earth, I was in the school library watching on one of the rare TV's in our school. I believe another TV was set up in the auditorium and many of the students were there trying to watch the tiny screen on the stage.

It was one of those events you never forget. There are a number of those in my lifetime, but this was one that filled me with pride.

So, it may be trite but, "Godspeed, John Glenn."
Posted by Maryanne at 8:08 AM No comments: