I hate to be reporting on the same things as my sister, but since we basically spent the past two days together and they have been somewhat eventful, I guess that's what I'll have to do! 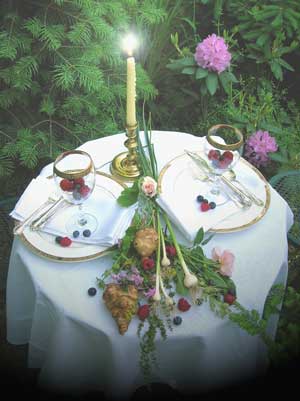 Tina's been working on a new book which will be called "Wild Foods for Every Table". Yesterday, we decided it was time to start planning the cover. As we planted the garden up at what will soon be her new house, we discussed ideas and by the time we were finished, we decided to give it a shot.

The picture to the left is not the one we will be using for the cover. You can see the finished product at the link to the book, above. This particular picture didn't have enough room at the top for the title, but we loved it and think it would make a great poster... We'll see! Of course, I played around with a couple of effects on Photoshop which make the candle flame more prominent, etc.... (Don't worry, I still have the original, which is probably better anyway).

The other memorable thing was this morning. We had a delivery to take out deep into Amish country and set out on our way relatively early. We got off the highway and immediately noticed a LOT of Amish buggies on the road. I mean a LOT! It appeared that the entire Amish population was out and about... taking back the roads!

We saw the basic buggies, and THEN there were the chariots, the station wagon style buggies, open buggies with ponies pulling them and any other kind of horse drawn vehicle you can imagine... It was very weird. I've lived in this county all my life and NEVER seen anything like it. The buggies, which are usually relegated to the side of the road, were two abreast (they were PASSING each other).

As it turns out, this is Ascension Day, which is a big Amish holiday. It is an excuse to take the day off and picnic with family and friends... very similar to the way we celebrate Memorial Day. All the Amish businesses are closed today (which foiled our delivery).

I know I wound up in Amish Country before on either Ascension Day or Whitmonday (which I still don't know what that is - apparently both are quite important in Amish holidaydom!) and no one was open... I just never saw the profusion of families on the move before.

Aside from these two things, I did finish a "different" set of beads this morning and may be able to photograpgh them a bit later. The colors are perfect to match a sarong/scarf I just bought and may wear this weekend (as part of an outfit)for our brother Tom's wedding at the beach. Stay tuned!
Posted by Maryanne at 12:48 PM