I will show you some of the latest.

The lovely birds on the left are the most recent addition to our never ending menagerie. Bob decided we need some wild turkeys in the woods... so he bought in some peeps and here they are. They are standing on one of the numerous shelters inside their roomy cage. They are still too young to be out in the world alone... although yesterday, we were planting some wild plants down in the woods and thought we heard some wild, wild turkeys chattering away just waiting for their new friends to join them.

The cage (aviary!) is next to the asparagus patch and these guys are about as friendly as they can be... We go out to pick asparagus and they are all over on the roof (like in the picture) asking what we are doing, and when are we going to throw in some more of that delicious chickweed?

There are some younger pheasants in the garage.. still bathing under a heat lamp and we're waiting for a bunch of partridge chicks... Never a dull moment. Yup, that's why I married him! 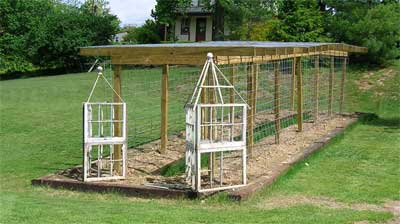 And then, there's this structure. My brother, Tom, had to call me just to find out what the heck this is for. Well, this year, it's going to be an arbor for gourds to grow on. That will be the experiment this year. Next year? Who knows?

Oh, the little towers in the front? It seems my dh, Bob, was watching Martha Stewart(!) and saw this use for old windows. He had been rehabbing some rental properties and just happened to have a number of old window frames. They are now tomato towers... pretty cool, huh? You plant the tomatoes inside and tie them up to the windows and crossbars. We've never really groomed them properly, but I think if you keep after them, they'd be really nice. Maybe this year we'll do them right!

Tomorrow.. some new fairy beads!
Posted by Maryanne at 4:34 PM

Oops, my bad, I called you Kae! sorry about that Maryanne, I'll slink away to the corner now.....