So, I haven't done any freezing or canning for years. Last week, we spent the morning freezing 46 bags of corn. This week, we had lots of cucumbers and decided to make pickles! 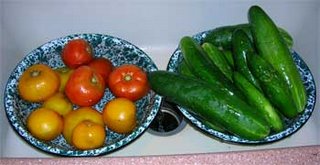 Here is what we started with - an overflowing basin of cucumbers and a few tomatoes. We figured we might as well can a few tomatoes while the kitchen was heated up.

Neither of us had ever canned pickles before and we were going to use a recipe for dills that looked especially good. When I was buying the jars (threw out all my old jars a few years ago!) I saw the pickle mixes and bought the Polish dill mix. While she was at the store later, Tina bought the bread and butter mix and the sweet pickle mix, so.....

First we canned the few tomatoes we had available. As I recall, this is a job usually done in the early part of September, but, oh well... 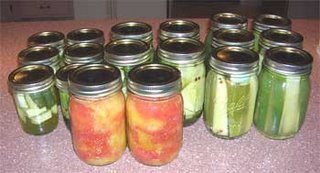 Then, the pickles. Our sinuses have been cleared and we have pretty much used up all the vinegar and sugar in our house! We made 6 pints of Polish Dills, 4 pints of Bread and Butter and 6 1/2 pints of sweet pickles. We chunked the sweet pickles and the chunks appear to have floated... oh, well.

We have more of the mix left and may make some more of them later. It was fun and it will be exciting opening these jars this winter to serve with special meals.
Posted by Maryanne at 4:24 PM

Hey... move the maters, I can't see the bread and budders.