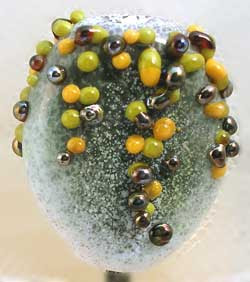 I decided to participate in another inspiration challenge and the first bead is the result. It sorta conveys the feeling of the picture (which I don't have to post - but you'll just have to trust me on that!)

I had just received a set of enamels for use with 104 COE glass and was trying to decide what to do with them. The idea of sifting dark near the top of the bead and lighter near the bottom worked out beautifully to give the bead a gently shaded background.

The original showed discs of gold and yellow and apparently one of the "yellows" I picked up was green... now it looks sort of like a mango tree! The original painting was much classier. 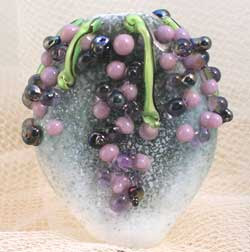 But after finishing it, I was so pleased and thought - wouldn't that be pretty with grapey swags instead and so, I made one in purples.

This has metallic spots throughout as well although they aren't as easy to see in the picture.

Both of these beads are pretty big - big enough for pendants which is another project I am working on - a pendant swap.

I was somewhat intimidated by some of the things that another participant posted. Her pendants were extremely ornate and very well done. I was trying to do something up to her standard and then thought - "You know, I don't do things like that and I think I'll just let my beads speak for themselves and make pendants the way I always have."

So now that I've calmed down, I think I know how to do this... and these new beads may just be
some of my entries. 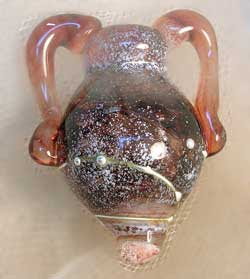 While I was fooling around with the enamels, I grabbed a large mandrel and a rod of "Iced Tea" glass and proceeded to make a vessel. I still had the enamels out and sifted a bit at the bottom and at the neck of the vessel. It needed something else, so I strung a piece of silver wire around it which melted beautifully into a beaded strand.

The vessel looks like a view of the galaxy. I'll need better picture to put it on my website, but meanwhile, we can enjoy it just like this.

What a good idea! I think I'll go in an treat myself to a glass
right now.
Posted by Maryanne at 2:55 PM