I really need to stay active with my torchwork. It seems I was away for a few weeks and came back really rusty. But, at least I made a few things to show.

The first thing is a bead I made for a challenge in a lampworking forum I frequent. This is the inspirational photo: 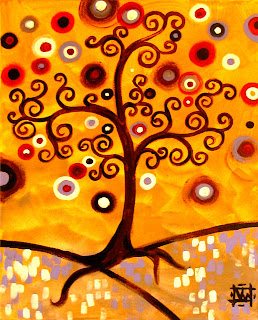 It's from this artist's website. And these are two sides of the one bead that I made in response: 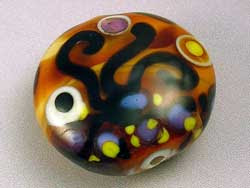 I've been wanting to try these concentric circles and was pretty happy with the way they turned out. I've switched to a shield and "grocery store" glasses and find my control has improved immensely! 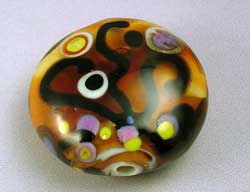 It is actually somewhat lighter than it appears in the pictures and it inspired me to try something else.... 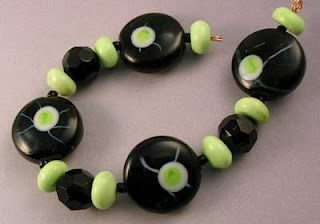 I call this one Electric Retro. I wear a lot of lime green and was planning to do something with dark blue and lime, but picked up black and away I went.

The faint white lines are encased stringers that were very thin. I expected them to show up a bit more, but as it turned out, I kinda like this effect since it looks like electrical currents flowing from the dots. 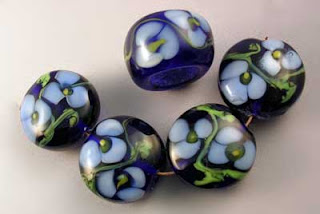 The blue and green set? Well, this is what I wound up with. There are four big fat lentils with a nice variegated stem and tendrils drifting around them and the dreamy lighter blue flowers floating inside.

The fifth bead is a large holed "slider". It can be used on a necklace or as a slide on a bracelet. 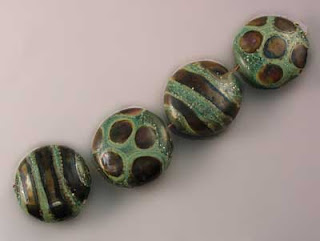 I was playing with silver the other day trying to recreate something I had seen online and although this isn't the result I was expecting, it was a pleasant surprise.

This is copper blue wrapped with silver foil. Dots of EDP were added and I reduced the whole thing just before putting it in the kiln.

I think the reactions turned out some pretty interesting beads. 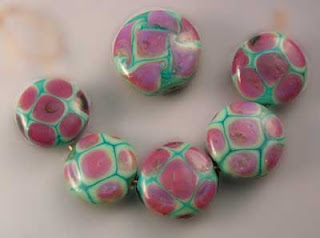 This is pretty much what I was actually trying to do. Funny what a little silver and reduction flame can do, huh?

The beads I was trying to make had a silvered line in the space where you see the dark turquoise. I think I know how to make them now, but I got such pretty results from my attempts that I don't think I have to!
Posted by Maryanne at 8:07 PM

Stunning!!! I really like the inspirational picture first of all. I must say, your interpretation into the glass is delightful! I love it!!! So glad you are back at the torch. I don't know how you juggle it all, but everything you create is simply wonderful.

I'm on the mend now. Epidural shot helped immensely, but apparently they want to automatically give you three in a row...so I have to do it again on Thursday. It wasn't so bad, and compared to the pain of not using my leg at all, I will take a shot in the back/butt. Maybe we can hang out sometime soon. I'd love to come lounge about your workshop and pet Rudy Patootie.

Hope all is well with you guys!