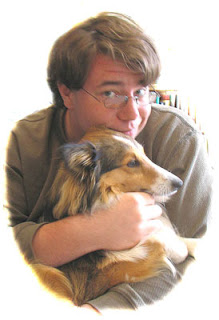 Wow! I can hardly believe it, but it was 21 years ago today that I woke with a slight backache and though maybe I should check with the obstetrician since I was getting close to the day we had scheduled for my C-section.

This was taken 2 years ago, but is probably the most recent picture I have of him since he no longer enjoys having his picture taken. His hair is a bit longer and unruly now, but he's still pretty much the same guy. 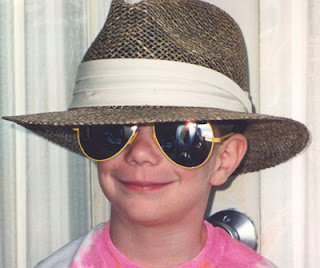 The second picture is one of my favorites. We were at the beach with most of the family and I'm not sure how it happened, but he put my brother's hat on and then someone added the glasses. Somewhere there's a picture of him in the hat winking. These just happened to be what I had on the computer.

You know, when your baby is born, you have all sorts of hopes and dreams for them. I remember looking at his little hands and thinking of all the things he would do with them in years to come.

We have been so lucky that he has grown up with a sense of responsibility about himself. He sometimes feels he is too serious and sometimes, I do too. I doubt though that he will have many regrets as he gets older. The things he really wants to do, he will do. He will reach his goals - as soon as he figures out exactly what they are.

I am as full of love and wonder now as I was that day so long ago, maybe more so now that that helpless little being has grown into a wonderful young man.
Posted by Maryanne at 11:07 AM

Happy Birthday to both of you.He may be too serious on the outside but snuggled some place inside that handsome young man is the boy with the shades and hat.Wonderful pictures, thank you for sharing.

Wow! What a milestone!! You know, even though I have only had a few chances to talk with him and get to know him, Rob really is a fine man, and you did such a great job guiding him to where he is today. He is very polite and kind, and his intelligence seems to not be limited to just the books. He seems so well rounded, and I look forward to being your friend forever so I can also see how he evolves. (Though I still think he and his little friend should just stop pretending they don't have a thing for each other! ha ha ha)

Please give him my birthday wishes. I hope he has a good one!

Big hugs from me!