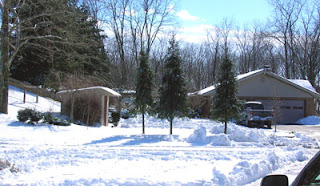 You may think this doesn't look much different that two days ago when I showed the same view. Well, if you saw it up close, you would see that the trees are covered in ice and that the driveway, although beautifully plowed is also ... ice!

It doesn't look bad - we only got maybe 6 real inches of snow, but the ice storm in the middle and the sleet during part of it has made a real mess. PennDot is having one heck of a time even trying to keep major roads open and a lot of businesses have just given up and closed. Our world is basically frozen solid!

Yep, that's the rear view mirror of my car in the lower right of the picture. I DROVE out to the shop because my Crocs just are not snow-worthy, besides, I am just not as nimble as I once was and a spill on that mess could set me back a week or so.

Today, we (Tina & I) were supposed to be on a train at 5:23 AM for NYC. We had been invited to take part in a brainstorming session with a marketing company for one of their customers. We were really looking forward to it, but it was not to be. Our tickets were ready, Bob was ready and willing to take us to the train station, but last night (at 11:20!) Amtrak called to tell us the train had been cancelled. Apparently while trains can plow through deep snow, signals and switches freeze and trains are cancelled. We thought about taking a later train, but we would have missed most of the event by the time we got there and furthermore, we had no guarantee that we would be able to get back home tonight - after dark when everything refroze.

So, we reluctantly cancelled and I looked ahead to a "free" day.

I am so happy to report that my website design program cooperated and I now have a revamped website with a new page called "Focals and Sculptures" that now showcases my fairies and mermaids and will eventually include some of the floral focals and other large beads I enjoy making. I showed them on a forum I frequent and was asked where they could find them - now they will know!

I also revamped my Vessels page and took down all the sold sets. Unfortunately, I have no more sets at the moment to put up, but I may get a chance to torch today and maybe a set or two will be on the agenda.

Tina spent hours on the phone this AM apologizing to the organizers and attempting (to no avail!) to find someone in the NY area who could fill in for us. Poor thing, she's exhausted and I feel sort of guilty that I'm exhilarated!

Now I believe I have some soap to make for a swap...
Posted by Maryanne at 1:26 PM