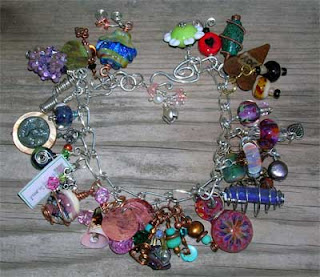 The title isn't original, since it was the name of the charm bracelet swap I was in (what seems like) a few months ago.

Well, this is the result. There was no theme - no rhyme nor reason so the charms. It still turned out pretty well and certainly makes an interesting conversation piece.

Plus, it matches everything!

It is interesting having charms from all over the US and a few from overseas as well. I hesitated to put it all together for fear I would forget where all the charms came from, but luckily one of the participants photoed and labeled all the charms separately and posted a PDF of the sheet. Now I can identify the makers easily. I will keep the sheet with the charm bracelet.

I had a hard time coming up with my lowly charm for this one, but then someone suggested a hometown charm bracelet. 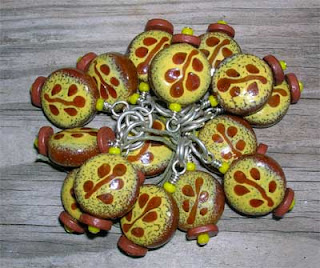 That sounded great! I love a theme and Lancaster, PA is loaded with symbols.

The most obvious would be the red rose and that was my first thought, but then I started thinking about all the other things that say Lancaster and Lancaster County. Quilts, produce, Conestoga wagons... and Redware pottery.

I think I actually talked about this before, but these will be my contribution to this bracelet.

After we were set on the hometown theme, someone had mentioned an affirmation theme as well and somehow, that became part of the same swap. 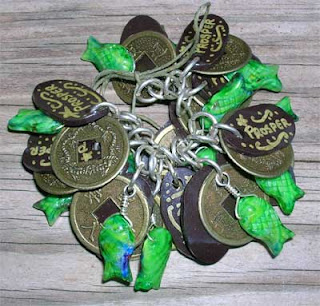 I was thinking of somehow using the Chinese coins I had in the last swap, but settled on a single lampworked bead.

With an affirmation to choose... how about prosperity? Hmmm... a lucky coin and a fish, both symbols of prosperity. A green fish no less.

Now, how to identify it? Oooh I had some Shrinky Dink plastic around and started playing with it. I tried stamping, but the ink wasn't working well with the plastic. I noticed that the gold marker I had used to add a few little flourishes had stayed well, so I reached for a darker sheet and used the gold marker on the brown plastic.

I wasn't able to fit the whole word "Prosperity" on the size I needed it to be, so I just went with "Prosper". I'm pretty pleased with both the charms for this one and I am way ahead of the game sincce they aren't due until Dec. sometime.
Posted by Maryanne at 5:54 PM