A trip into the country 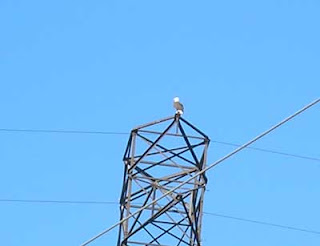 Yesterday, again on a delivery trip, what should swoop past our car and head up to the top of a huge electrical high tension tower? You guessed it, another eagle!

This time I stopped the car and I got out to take a picture. I even used the telescopic feature on the camera. You can see it is still somewhat blurred, but it is clearly a bald eagle.

Supposedly, the eagle is a symbol of great power and also a messenger of the gods.

I'm not sure exactly what it means, but we have been feeling as if there is something in the air recently business wise, personally... who knows? Seeing two within a week after a lifetime of never seeing them certainly should mean something. Or it's a coincidence.... 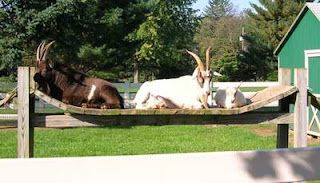 On a more mundane vein, we were in Amish country, as usual, and when we stopped at the Bird-in-Hand Bakeshop to drop off a few boxes, I was attracted to the "barnyard" petting zoo by this gang of sleepy goats!

They look like the "Three Billy Goats Gruff" relaxing on the bridge after dispatching the nasty old troll!

Years ago, when we had our own little herd of Pygmy goats, my DH built them a jungle gym contraption with ramps and bridges like this one. They always seemed to want to be at the highest point. Must be some of that mountain goat blood still in them! 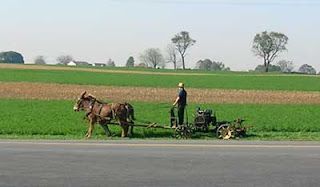 During our final stop of the day, at an Amish roadside stand, as we were getting ready to leave, this contraption drove past in the field across the road. He is cutting alfalfa hay.

While the "rig" is being pulled by mules, there is a piece of machinery on the back that seems to be gasoline powered. My husband called it a sickle bar.

Each little group of Amish has specific rules.. and they can vary one from the other. Some are absolutely opposed to any form of gasoline engine. Some allow machinery like this, but do not allow gasoline lawn mowers. Some are the reverse.

In the past, many farms had a "phone booth" at the end of the driveway that may have been shared with other families in the area for use in emergencies. It seems that now, more and more, many Amish, especially those in business use cell phones. I wondered why this is so, but it just occurred to me that one of the things that is not allowed is to be connected to the outside world by "wires". I believe the real reason phones were forbidden was to encourage family time and if you think about how much time you spend on the phone (or watching TV), ignoring your family, you will understand the theory. The age of wireless may be their undoing.
Posted by Maryanne at 9:54 AM