Back in May, when it was first built, I posted a picture of this structure. With all the rain we have had, plus judicial care on Bob's part, they have grown at an almost frightening rate. Part of this "care" included installing electric fence around the whole thing to keep the turkeys out.

He also felt the need to install electric fence around where the turkeys slept the first night because we think a fox carried one off. This (I'm not sure if it was the fox or the electric) led to their most recent perch which I showed you just the other day.

The turkeys were not at their usual spot last night (thank heavens!), so we aren't sure where they are spending their time now. Bob's worried, but I think they were just probably insulted since he washed away the piles of excrement that they left on the brick path to our back door! 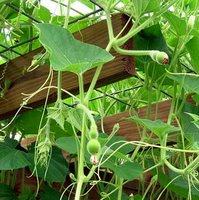 Okay, back to the gourds. They have started actually bearing fruit. These are just a couple of the tiny baby gourds forming all over the vines. These particular ones look like bottle or bird house gourds, but there are also snake gourds, dipper gourds and mini gourds that I think might be fun for jewelry use (somehow)!

This morning, the new rooster started crowing. A sound Rudy, our pooch, has not heard before. Rudy decided that the correct answer to this noise should be a howl! I was outside, talking to Tina on the phone when this interchange began, and both of us were highly amused. The rooster would crow, Rudy would follow with his answer, and it continued for some time.

Honestly, there is never a dull moment around this place!
Posted by Maryanne at 9:45 AM

I think the turkeys were busy plotting their master plan to take over Lancaster. Watch your back,girl!